Ectopic pregnancy is the condition in which the fertilized embryo attaches itself outside the uterus unlike the regular implanting inside it. Uterus includes two fallopian tubes for transporting eggs from the ovaries to the uterus. Ectopic pregnancy occurs in one of the fallopian tubes and hence it is also known as tubal pregnancy. Often, the fertilized embryo will not survive and hence has to be removed. If left untreated, it can cause further complications and heavy blood loss. In rare cases, ectopic pregnancy occurs in the neck of the uterus or cervix region.

What Happens During Pregnancy ?

Normally eggs are released from the ovaries and are seen floating in the fallopian tubes. At the time of fertilization it fuses with the sperm and get fertilized. Further the embryo moves into the uterus to attach itself on the lining of the uterine wall and continue to grow there till full term of pregnancy is complete. But in ectopic pregnancy, the fertilized embryo remains in the fallopian tube itself.

In rare cases the embryo attaches to abdominal cavity or grow in one of the ovaries. In both the cases it poses danger to the life of the mother. Hence ectopic pregnancy has to be terminated immediately. Having an ectopic pregnancy and not removing it decreases the chance of having healthy pregnancy in future.

Initially there will not be any symptoms during ectopic pregnancy. But after few weeks of conception you may have tenderness in the breast, nausea, vomiting and missed period. Even you will get positive result on taking home pregnancy test. But you will not know that it is ectopic pregnancy until you have vaginal bleeding or abdominal pain.

There will be moderate to severe pain in the abdomen with light vaginal bleeding. It is the first warning sign to show that the pregnancy is not normal. Some women will have shoulder pain and frequent bowel movements once the blood starts leaking from the fallopian tube. There will be heavy bleeding if the ectopic pregnancy occurs in the cervix region of the vagina. In rare cases, fallopian tubes may rupture inside causing heavy bleeding of abdomen. It will cause confusion and fainting with shock.

In addition there will be other symptoms of pregnancy like nausea, vomiting, dizziness, abdominal pain. The only way to differentiate normal pregnancy from ectopic pregnancy is vaginal bleeding with abdominal pain. Pain will radiate from the vagina and spread till your rectum. 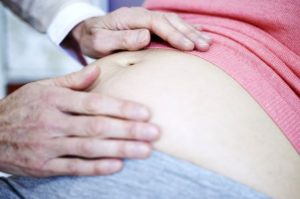 Your doctor can identify ectopic pregnancy through pelvic exam. She might look for mass or heavy size of substance on the fallopian tubes. But the diagnoses will be confirmed by imaging studies like ultrasound scan. The result of ultrasound will clearly indicate that the fertilized egg has developed in the fallopian tube itself. Normally 4-5 weeks of pregnancy scanning will indicate whether it is normal one or ectopic pregnancy.

There is no space available for the fetus to develop anywhere outside the uterus and hence ectopic pregnancy should be terminated. Very often, an injection of methotrexate is enough to arrest the growth of embryo and dissolve the existing cells. After given a shot, your doctor will re-check your blood test for the presence of pregnancy hormone HCG. In case if the level remains high, then you will be given another injection of methotrexate.

Laparoscopic surgery is done by making small incision in the abdomen near the navel area. Then your surgeon will use a tiny tube which is fitted with camera and light for cutting and removing the ectopic tissue fully. In case the fallopian tubes are damaged it will be repaired. In rare cases rupturing of fallopian tube occur inside during which fallopian tubes has to be removed. In most of the cases, medications are enough to block the growth of ectopic pregnancy and for removing the tissue. 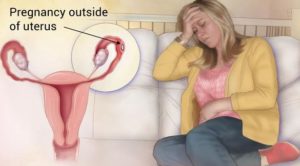 Whether You Will Get Pregnant After Ectopic Pregnancy?

Most of the women will continue to have normal pregnancy after having an episode of ectopic pregnancy. This can happen even if one of the fallopian tubes has been removed. Consult your doctor if you have plans for getting pregnant immediately. Depending on the health condition your doctor may advise you to wait for another 2-3 months before getting pregnant again.

Nothing can be done to prevent ectopic pregnancy. You can only reduce the risk factors and practice safe sex using a condom. Avoid having sex with multiple partners since it poses risk of getting sexually transmitted disease.

It is really devastating to know that your pregnancy is not normal and has to be terminated. You can express your feelings to your partner or take help from counselor to let out the suppressed emotions. You still have hopes for getting normally pregnant in the near future. Be optimistic and carry on with your life.