Acne rosacea is the most common skin disorder affecting millions of people worldwide. Though the onset of pimples and lesions on the face is during adolescence still many people will have continued skin disorder causing acne development even after middle age. This affects the skin on your face causing pimples, bumps, flushing and redness. Rosacea can affect the eyes and even nose. Acne is largely seen on teenage people and rosacea affects middle aged and old people.

Acne and rosacea are different in medical perspective but both are chronic disease and affects the skin of your face. Pimples or bumps are formed when the hair follicles of your skin gets clogged up. Pimples or acne are formed largely on the face, neck and back portion. For some people it is formed on the chest and even on shoulders. Acne is curable but it leaves a scar permanently on the face.

Exact cause for acne rosacea is unknown. It is believed to be caused by hormone changes during puberty. Sebum is the oil secreted by sebaceous glands of your skin that is responsible for keeping the skin oily. But when sebum is secreted in excess quantity it blocks the pores of the skin. When dirt and debris get accumulated on the pores with oil it leads to pimples or bumps called acne. Stress is also another factor that triggers acne formation.

The symptoms of acne rosacea will differ from one person to other, but there are some common symptoms listed below. Rosacea is characterized by flushing, redness, bumps and pimples formation. The face turns completely red as if you are flushing. For this reason it is called flushing disease. For some people there will be persistent redness on the face resembling blushing.

Severe irritation is normally present when pimples develop on the face. For some there will be burning sensation and small blood vessels become visible on the skin. Rosacea affects the skin near your eyes causing irritation and watery eyes. The eyelids can also become red and swollen resembling stye. The entire skin of the face may become dry and irritated with raised red patches resembling plaque formation.

It is easy to diagnose acne rosacea with the given symptoms above. Since it is a chronic skin disorder it is difficult to treat.

Topical medications are given for treating pimples and bumps. Redness and flushing are present in this disorder. Plenty of topical creams are available for managing acne and rosacea but it always recur on many people. Long term usage is recommended for preventing remission of pimples. Nowadays laser treatment is taken by many people wherein intense pulsed light is applied on the affected skin. You need to follow gentle skin care routine for preventing flare ups and remission.

Do not wash the face repeatedly since it will cause more dryness. Always keep the face clean and dirt-free. Avoid going out in sun and apply sunscreen lotion that contains SPF range of 13 or high when you go out in sun. Exposure to sunlight increases the pimples formation. The outcome of any method of treatment varies from one person to the other. For some people acne is cured completely and for others it leaves a scar and flare ups are always there. Your doctor will have to devise individual treatment according to your skin condition.

It is good to use facial cosmetics to some extent for covering redness and flushing appearance. Laser therapy is suggested for getting satisfied results and you have to take several sessions. Skin thickening occurs in many people for which cryosurgery and radiofrequency ablation is done. Skin grafting procedure is done for removing excess of tissue on the skin which is followed by dermabrasion. 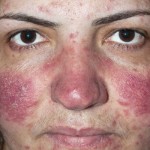 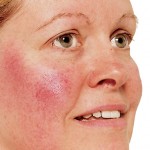 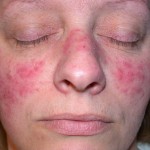 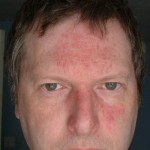 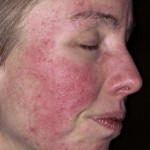 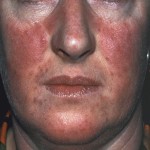 Foods To Be Avoided :

Certain foods are known to trigger acne formation; hence it is advised to avoid taking these foods. Fatty foods, chocolates, cheese, vinegar, spicy foods and foodstuffs high in histamines are to be reduced. Avoid taking excess of coffee, tea, alcohol and any other hot drinks. Acne rosacea is a chronic skin disorder and is marked by regular flares and remissions. The symptoms can be managed by regular cleaning and application of topical creams.