Usual body temperature is 370C or 98.60F   and it can vary slightly from person to person. It may fluctuate depending on the time of the day. Oral, rectal and axillary thermometer can be used to check the temperature.

Acute fever is mostly seen in children, infants and aged population when their immunity is weak. The immunity in children is at a growing stage and hence throughout the teenage and adult stage of life, the body is well-guarded against the most probable causes of acute fever. Even then, with the increase in pollution and population of harmful microbes and viruses in our surroundings all the age groups are equally vulnerable to suffering from acute fever.

The Degree Of Acute Fever

The degree of acute fever can be mild, moderate or severe and depends on the cause of the fever. The factors may include the portion of the body that is infected and also the extent of the infection. It is also quite obvious that the earlier the condition is treated the lesser the patient will have to suffer. Although acute fever of any form is usually controllable, certain extreme conditions such as fever due to sepsis can turn-out to be life-threatening and requires immediate medical professional attention.

Acute fever varies greatly depending upon the cause and the region infected. The regions of the body that usually act as the host of the infection that leads to the rise in the body temperature are 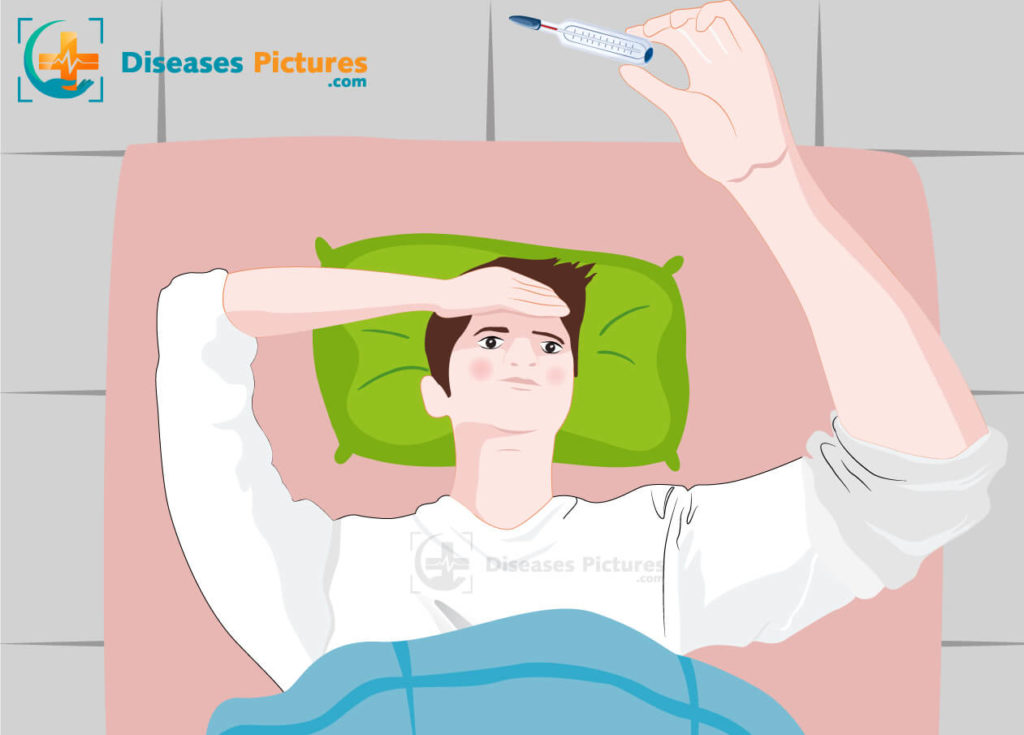 Hypothalamus in brain regulates body temperature and it elevates temperature in response to any infection. There are a number of other causes that include

1. The symptoms for upper respiratory tract infection are

3. The gastrointestinal tract infections can be both bacterial and viral. The symptoms include

4. There is a feeling of laziness and weakness in the body that indicates the invasion of a foreign body such as microbes or viruses in the body. In case of infection in the urinal tract, if there is blood in the urine then immediate medical attention is required. Some other symptoms include

If there is pus discharge then it is recommended to get the condition checked by a doctor immediately.

5. Certain skin diseases do lead to acute fever. The symptoms may include

The most common symptom is pain in the affected region which may be caused by secretion or injection of toxins by an insect bite.

6. Drugs can cause changes in the functioning of the body which leads to the change in the internal conditions. Over-dosage of drugs can lead to permanent damage to the body and immediate symptoms include

Narcotics such as cocaine, ecstasy, and anesthetics can also raise the body temperature level over the preferred normal value.

7. Acute hemorrhagic fever syndrome is a special type of condition which is related to the conditions such as

The diagnosis depends on the cause of the fever. The first step in diagnosis is thorough physical check. The next step is evaluation of present illness history and review of medications. Usually temperature is checked by using thermometer. If temperature is elevated and confirmed by doctor further diagnostic methods are ordered to know the cause. Differential diagnosis approach is followed in case of non-infectious causes.

A complete blood test is usually recommended or if the cause can be predicted from the symptoms then certain tests are asked to be taken for the confirmation. The patient is made to go through a thorough physical examination, palpation, auscultation to learn the condition of acute fever. The patient’s history is also taken into account.  Some other tests are carried out to assess the cause of the fever such as

Sometimes X-rays or other imaging scans, ultrasound etc. is also used to check the condition of the internal organs and the infected regions.

As the diagnosis is symptomatic the treatment of acute fever is also symptomatic. Most of the time it is self-limited and relieve on its own without treatment. The patient is asked to take rest during the treatment period and the period depends on the degree or type of infection or fever present. Drink plenty of fluids to stay hydrated. Although acute fever is a good sign that the body is resisting against changes in the internal conditions and trying to return to its stable state leading to the rise in body temperature, certain types of fever such as rheumatic fever require special attention.

In case of viral fever, there is no known treatment but the pain and symptoms are kept under control until the body produces its own antibodies to fight against the invading microbes. NSAIDs such as Tylenol can be used to relieve symptoms. The main drugs used for the treatment are

Aspirin should not be used to control fever in children and adolescents. Paracetamol and ibuprofen are safe to use in children for short term. Antipyretic drugs improve comfort and relieve pain and reduce the risk of dehydration. In case of use of drugs, a physician must be consulted and the dosage should be taken as prescribes by them.

It is advised that the patient take a bath regularly, preferably in tepid water which acts as a natural remedy to bring down body temperature or take sponge bath with lukewarm water. The patient should wear only light clothes to keep the body temperature under control.

There are also many herbs and their extracts that are used for the purpose of treatment of fever and are increasingly gaining popularity. For example, the genus Angelica is known for its anti-inflammatory, antipyretic and diaphoretic properties. In Ayurveda, a traditional age-old Indian practice of medicine the leaves of Abies Pindrow Royle have been used as a natural antipyretic.

There is no absolute method to prevent acute fever but it is recommended to keep the surroundings clean and free of harmful bacteria and viruses. It is advised to take precaution as soon as there is a sudden increase in the number of people suffering from acute fever in the neighborhood.

Other preventive methods are