You are here: Home / Information / Angioedema

Angioedema is characterized by accumulation of fluid on the deep layers of the skin. It causes inflammation of the tissues below your skin and occurs often in eyes, lips, hands, feet and genitals. It produces red colored raised patches on your skin and the size may vary from small to large blotches. The important feature of this disease is it affects deep layers of the skin unlike other infection that attacks only superficial layers. Angioedema can be treated well with antihistamine drugs. It is also called as hives forming nettle rash like appearance on the deep skin.

There will be swelling of skin in the affected area like hands, feet or eyes. It forms thick large sized welts causing pain and discomfort on the eyes or lips. In case it occurs in the inner lining of throat or tongue it can cause difficulty in eating and breathing.

Hereditary angioedema is inherited and present in genes. It can affect your skin suddenly causing rapid swelling on arms, legs, face and genitals. In rare cases it affects the digestive tract causing inflammation and pain, which may cause abdominal pain.

Angioedema is classified into 4 major types.

Exact cause of angioedema is not known but is believed to be induced by allergic reaction to food. Hives are also produced due to adverse tissue reaction by stimulation of mast cells that secretes histamine into the blood.

Some of the allergens that trigger swelling of skin are foods (peanuts, eggs, milk, fish and shellfish), medicines (aspirin, advil, aleve and ACE inhibitors), and environmental factors like sunlight, heat and emotional stress. Even insect stings and animal bites can trigger such reaction.

In rare cases angioedema occurs during blood transfusion and during certain autoimmune disorders.

People with known allergic problems, those who are treated for lupus, thyroid problem and hives and individuals with hereditary angioedema have increased chance of getting this disease.

Complications can occur if swelling of deep layers of skin occurs in your throat that can block the airway causing loss of consciousness. Sometimes a serious anaphylactic shock can affect your lungs and heart causing rapid drop in blood pressure which can be fatal.

No testing procedure is required to detect angioedema since the symptoms are clear and distinct. Your doctor may request for blood test to find out the type of angioedema. In case the allergic reaction is the result of intake of foods then your doctor will find out what food exactly caused such allergy.

For some people puncture test on the skin is performed in which droplets of allergen extracts will be sent into your skin through pricking of skin surface. This is done for diagnosing particular type of allergy like animal dander or insect sting.

In most of the cases, angioedema requires no treatment since it will resolve on its own. Oral histamines or steroid are given for reducing inflammation and redness. If the allergic reaction is due to the adverse reaction of drug then your doctor will give suitable alternate medications.

Treatment is given only for relieving the symptoms like itching and discomfort. Antihistamines like cetrizine, loratadine and Allegra, Clarinex are given. It may cause drowsiness and hence you should be careful and avoid driving. You can also take non-prescription drugs like Benadryl or chloropheneramine for managing itchiness.

For people with hereditary angioedema oral corticosteroids like prednisone is given on long term basis. Drugs like cinryze and berinert are obtained from blood plasma which is effective in correcting defective genes that cause swelling and allergy. Kalbitor (a protein like drug) is prescribed for managing hereditary angioedema. 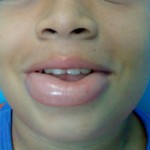 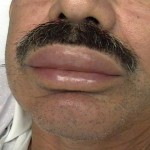 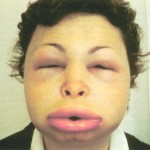 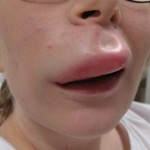 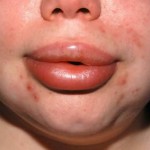 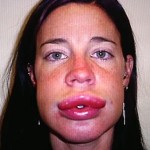 It is enough if you identify the allergy causing foodstuffs or substances and avoid them completely. You can apply cool compression on the affected skin area for preventing scratching. Taking an oatmeal bath can help you to overcome the situation.

The best way to prevent angioedema is to avoid foods and factors that trigger it.