Anthrax is a life threatening infectious disease caused by bacteria. It affects your lungs and would cause inflammatory bowel disease. It spreads through skin contact, ingestion and inhalation of spores from animals. The bacteria that cause anthrax live in the body of animals and get contracted through spores. This deadly disease can be prevented and treated. The infection can spreads through bioterrorist attack also.

Bacterium by name Bacillus anthracis causes anthrax infection on animals. Initially these organisms live in the soil in dormant form known as spores. The spores are capable of surviving for many years and are difficult to destroy.

Anthrax bacteria can be contracted in 3 methods :

Incubation period is the time between the initial contact of anthrax and the onset of symptoms. It can be from 2-5 days and it varies according to the species of organisms causing it. For some people it can take weeks together for getting symptoms.

Anthrax affects the animals and humans causing diseases on the skin, the lungs and the intestine. Broadly it can be categorized into three forms:

The doctor will collect the medical history of the affected person and order for tests like blood profile, throat swab, sputum test and chest X-ay. Further he may order for imaging tests like CT scan or MRI scanning to confirm the diagnoses. Anthrax will be tested in the laboratory and bacteria can be seen under the microscope.

Any person can receive the spores that contain anthrax through inhalation. But people who are involved in certain types of jobs are placed in higher risk than others. The risk factors of getting anthrax is high for people who are working as lab technicians, veterinarians (handling infected animals daily), livestock producers, workers who deal with animal products and military personnel who are (engaged in bio-war events) handling anthrax powder.

People who frequently travel to countries like Southern/Eastern parts of Europe, central/South America, certain parts of Asia, and the Caribbean zone are more prone to develop anthrax than others. Certain areas have high risk of anthrax exposure when infected animals are slaughtered and meats were used. Finally workers who are involved in making drums (made of animal skin) and people who handle such drums are prone to develop anthrax. Such animal hides have chance of getting infected since no tests are made before such hides were imported. 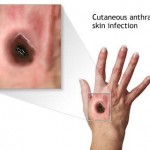 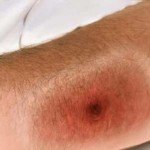 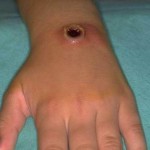 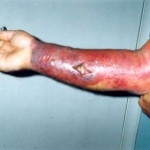 Early treatment is very much necessary in the case of anthrax. Antibiotic creams that contain ciprofloxacin, tetracycline and penicillin are prescribed for treating cutaneous anthrax. For inhalation anthrax, the patient should be admitted in the hospital and given antibiotics intravenously after giving supplementary oxygen for respiration. It is essential to start with antibiotics for the affected person during a bio-terror attack even before the person becomes ill. Antitoxins are effective in treating patients whose body contains “active” anthrax. The active anthrax will multiply several folds producing toxins in huge quantity affecting the functions of vital organs.

Vaccine is available for treating people who have high risk of contracting anthrax bacteria. But it is not available to the general public till now. Newer forms of vaccines are under research study and being tested with animals.