You are here: Home / Nutrition / Apple Health Benefits – Know Why Apples Are Good For Health

“An apple a day, keeps the doctor away”, says an old proverb. Apple is considered to be complete diet consisting of all the essential nutrients your body needs. They are rich in antioxidants needed for fighting diseases. Apple by itself can repair damaged cells and cure many diseases.

Apple is packed with vitamins, minerals and fiber. It is a bundle of energy serving complete diet of a person. Taking one apple equals to taking one cup of mixed fruit. Though an apple can be gratifying your stomach for long time it adds only 52 calories to your body.

100 gram of an apple contains about 13.8 gram of carbohydrate, 0.1 g of fat, 0.26 g of protein and 2.5 g of dietary fiber in it. Further it includes a long list of vitamins like Vitamin A, C, E, K, Niacin, pyridoxine, riboflavin and folates. Minerals like calcium, iron, magnesium, phosphorus and zinc are present in an apple in addition to electrolytes like potassium and sodium. Essential antioxidants and phytonutrients are rich in apple.

Not many of you know that biting an apple or any other fruit helps in cleaning your teeth. It removes bacteria and other parasites from the oral cavity and gives you sparkling smile.

Certain chemical like acetylcholine in the brain is responsible for aging. Eating an apple daily stimulates production of such neurotransmitters thus helping in keeping you young. Further apple is known to trigger metabolism and improve blood circulation thereby reducing wrinkles and premature aging. This is not just a statement but has been proved by research. 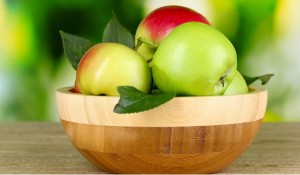 You are reducing the risk of developing cancer in the pancreas by 23% by taking an apple each day, according to the report given by the American Association of Cancer Research. Apples are rich in flavonol helps in preventing cancer. Apple is capable of preventing cancer causing cells in the liver, colon and even in the breast. Make it a habit of eating an apple a day and you have low risk of developing cancer.

It has been proved that taking an apple a day reduces Type Two diabetes in the long run. Apples are capable of burning unwanted sugar loads thus helping in maintaining blood sugar levels. In addition, soluble fiber present in the apple aids in removing the fat molecules from the intestine, thus lowering cholesterol in blood. Apple prevents the absorption of LDL or bad cholesterol in blood. Further it helps in preventing the exposure of mucus membrane of colon to toxic substances thus reducing colon cancer.

5. Lowers The Risk Of Heart Attack :

Taking high soluble fiber daily will gradually reduce the plaque build-up in the arteries of your heart, thus reducing an attack. A person is likely to get heart attack by gradual accumulation of plaque like particles in the major artery that supplies blood to the heart. The compounds and other soluble fiber present in the apple removes such plaque thus reducing the risk of heart attack.

By taking fiber rich diet like apple each day, the chances of developing gallstones is very low. The risk of gallstone formation is high in overweight people. You can manage your weight and cholesterol level by eating an apple a day.

People suffering from long-term constipation can benefit by eating apples. Eating apple regularly can make the bowel movements soft. Fiber content present in the apple would help in drawing out more water content from your colon thus preventing constipation. Similarly apple can help in reducing watery stool by absorbing excess of water from the stool thus preventing diarrhea. Constipation related diseases like piles, fistula, hemorrhoids and irritable bowel syndrome can be managed by eating apples regularly.

Apple fills up your stomach since it is fiber-rich content. You will not feel hungry for long time after eating an apple. You will not increase your pounds if you are not eating frequently. Thus apple helps indirectly in reducing your weight. 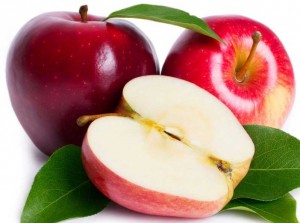 9. Helps The Process Of Digestion :

The process of digestion begins right from the mouth when food particles get mixed up with saliva. It reaches the stomach wherein plenty of gastric juices and enzymes act on it. Now the food particles are in the form of “chyme” a semisolid matter which is sent into the small intestine where most of the nutrients are absorbed and finally it reaches the large intestine. By taking fiber rich food like apple, food particles can pass through the digestive tract smoothly. Fiber helps in triggering peristaltic movement of the muscles thus facilitating movement of food. You can completely get rid of digestive problems by eating apple regularly.

Metabolic syndrome can be defined as a group of medical conditions like high blood sugar, high level of cholesterol and high blood pressure. People with metabolic syndrome would have a bulky abdomen showing excess of fat build-up around the waist and they are more prone to heart diseases and stroke. According to the study conducted by NHANES people who have included apple in their diet are at low risk of metabolic syndrome than others. Apple reduces the level of C-reactive protein thereby reducing the risk of heart problems and diabetes.

Anemia is a medical condition resulting from reduced levels of hemoglobin in blood. Regular intake of apple can increase the iron levels in your blood thus increasing hemoglobin and hence apple is recommended for patients suffering from anemia.

13. Cataract and Other Eye Problems :

Apple is known to improve eyesight if taken daily. Phytonutrients and flavonoid compounds of apple reduce the effect of free radicals on the eyes thus preventing macular degeneration and cataracts and many other eye disorders.