Asbestosis is a type of lung disease that develops due to prolonged inhalation of asbestos fibers. This mineral fiber could cause scarring of lung tissue causing even lung cancer in final stages. People who were employed in asbestos industry have increased chance of getting asbestosis. Unfortunately the symptoms will not appear for 10-40 years of exposure to asbestos and hence diagnosing and treating asbestosis can be difficult. The damage caused by asbestosis is irreversible but medications and therapy are available for managing the symptoms.

Asbestos is a strong silicate mineral which was largely used for making fireproof articles like building roofs and insulation. This mineral fiber becomes weak with age and emits fine particles of asbestos fiber in the air which can be inhaled by us. Earlier this mineral was also used for making theater curtains and for making gloves worn by firefighters due to its insulation property. But from 1970 the federal government of the America and several other countries of the world, has banned use of asbestos and its products since it can cause lung disease.

Nobody would show the symptoms of asbestosis after initial exposure. It might take minimum 10 years and maximum 40 years for the body to show its symptoms. Some of the common signs of asbestosis are persistent dry cough, difficulty in breathing, loss of appetite, deformity in fingertips or toes and chest pain.

The tips of fingers who handle asbestos for long duration can become wide and round getting changed from normal shape and size which is called as finger clubbing or swollen fingers. However this symptom appears only in the final stages of asbestosis. It can cause tightness in the chest with shortness of breath.

People who deal with asbestos and its products like aircraft mechanics, miners of asbestos industry, workers who are involved in making asbestos roofing, electricians who handle asbestos wires and other workers who use asbestos in any form are at high risk of developing asbestosis. A person who works in asbestos or related industry and smokes has increased risk.

How Far It Is Common ?

After the ban of asbestos products by the government, asbestosis is considerably decreasing. Asbestosis is a rare disease since it takes many years for the disease to progress after initial exposure. 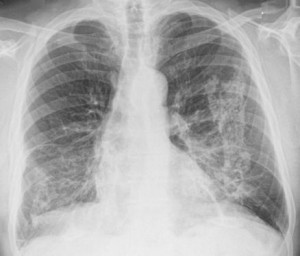 It is difficult to diagnose asbestosis since the symptoms given above are close to many respiratory diseases like asthma or lung infection. The doctor would collect the complete history of the patient and his workplace. He may order for chest X-ray and other imaging tests to detect the presence of asbestos fibers in his lungs. Pulmonary function test can also be done to check whether the lungs are functioning well.

Asbestosis cannot be cured and the damage caused by inhaling asbestos is irreversible. Scarring of lung tissue and alveoli sacs cannot be treated. Based on the symptoms, your doctor may suggest supplemental oxygen to help in normal breathing. In severe cases, lung transplant can be done. People diagnosed with asbestosis have high risk for getting lung cancer, pleural disease and mesothelioma (cancer that affects the lungs and heart).