Babesiosis is a parasitic infection that affects the red blood cells. Babesia are group of parasites that infect the animals often and more commonly it attacks the white mice. But rarely the same species of parasites may infect the humans also. A person can get transmitted with the parasites through the bite of blacklegged ticks. Babesiosis is also called as piroplasm.

Bite of infected tick is the main way in which humans can get Babesia infection. Lxodes scapularis ticks or blacklegged ticks carry these parasites which remain in the nymph stage. Often they spread during summer and spring season and are largely found in woods or grassy regions. People who are infected may not even realize the tick bite since they are very small. In rare cases the person can get infection while receiving contaminated blood which is already infected. In some cases mother can pass on their infection to the fetus during pregnancy.

Cases of Babesiosis infection have been reported in the regions of New York, New Jersey, New England and Wisconsin. In the Northeast provinces it can occur in the coastal areas like Massachusetts and Nantucket.

Babesiosis is caused by Babesia microti parasite. There is more than 20 such variety of piroplasms that are carried by ticks. Ticks are the major source of transmitting the infection to humans and animals.

Often, people who are infected with Babesia do not show any signs. Some people may develop fever, chills, and headache and body pain resembling flu like symptoms. Babesia parasites are capable of infecting RBC and can cause hemolytic anemia. People with weakened immunity or people with chronic diseases like cancer or AIDS can develop serious symptoms and sometimes it can be life threatening.

Elderly people and people without a spleen and people with kidney or liver diseases may show serious symptoms. For people with pre-existing diseases in kidney/liver the blood pressure may drop down rapidly and they may develop organ failure. 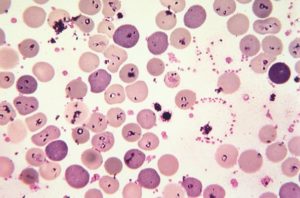 Based on the symptoms, your doctor would request for complete blood profile. Diagnosing babesiosis becomes easy for your doctor if you are living or recently traveled to endemic areas. Red blood cells of your body are checked for the presence of parasites in it. He would also get your blood tested for other infectious diseases like Lyme disease.

Anti-parasitic medications are to be given for Babesiosis infection, since antibiotics are not useful. Sometimes a combination of anti-parasitic and antibiotic is given for the patient to control the symptoms. Drugs like Mepron or Malarone and antibiotics like azithromycin or telithromycin are prescribed. People who have had an infection have more chances to develop recurrent attacks than others. Chronic infections are to be treated for months together with the above drugs to prevent relapse.

People with weaned immunity and chronic diseases like liver or kidney problems should be more careful in not getting this infection. They should avoid traveling to infection prone areas and more so in summer months. No vaccine is available for preventing Babesiosis.