Bile is a fluid green or yellow in color and is secreted by the liver for helping in the process of digestion of fats. Bile is made of bile acids, bile salts and water and is produced by the liver. Hepatocytes is a type of liver cells that produces bile which is stored in gallbladder and released whenever is needed.

Bile is released from the gallbladder (storehouse) once you eat fatty foods which trigger the duodenum to produce cholecystokinin which in turn stimulates the gallbladder to release the stored-up bile.

It helps in digestion by breaking up fats into fatty acids which can be easily absorbed by the body. Bile salts help in the breakdown of fat particles present in the food and also in the absorption of fat particles in the digestive tract. Bile salts are capable of converting lipids into micelles which can be absorbed easily by the intestinal mucosa.

Bile liquid also contains waste products of hemoglobin during the breaking down process. One of them is bilirubin which is produced by red blood cells which is further sent down to the liver for recycling. Old red blood cells are regularly destroyed by the body and are replaced with fresh bilirubin rich in hemoglobin. Excess of bilirubin is excreted by the bile and it also deposits excess of cholesterol particles present in the food into the gastrointestinal tract which in turn is excreted along with other waste particles.

Liver produces around 500 ml to one liter of bile each day in healthy adult. As the secreted bile moves through the duct several ions like water and salts get mixed with the bile expanding its volume. These ions also aids in neutralizing the stomach acid helping in the process of digestion. When the digested food (semisolid state) leaves the stomach it also carries diluted bile thus facilitating digestion. 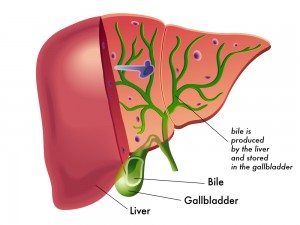 What Happens When Bile Is Not Produced In Sufficient Quantity ?

Absorption of fat is not possible without bile. Absence of bile can drastically increase the acidity of stomach resulting in heartburn. Stomach acid would not get neutralized properly causing acid reflux and heartburn. Improper production of bile can cause symptoms like bloating or fullness in the stomach and abdominal tightness. Inadequate secretion of bile can increase the toxic materials in the abdomen since bile is the agent that lowers the toxicity level in the body. Gradually this can lead to liver congestion and building up of gallbladder stones. Bile production can get reduced if the cholesterol level of the individual is very low.

For accommodating bile in large volumes the gallbladder would make the bile thicker and thicker. You will be surprised to know that bile stored in the gallbladder is roughly 20 times thicker than the bile available in the liver. Bile concentration is essential for its storage in the small gallbladder. Bile is made of many salts of which some portions of cholesterol, bilirubin and lecithin salts would remain in the gallbladder and the balance is transported further. Bile is made of several salts like water, cholesterol, bilirubin, fatty acids, ions like sodium, potassium, chlorine, calcium, and bicarbonate ions. All these essential salts are stored in concentrated form in the gallbladder. However bile present in the liver contains largely water, sodium and chlorine ions and not other salts since it is in the diluted form.

Eating food can stimulate bile secretion in the liver. As a person ingests food the process of digestion begins in the stomach and food particles are broken down into many small pieces and after mixing with the gastric juices it becomes semisolid (chyme) in texture. From the stomach these particles slowly moves into the duodenum. During this process cholecystokinin cell of the gallbladder is stimulated to release required bile. Sphincter muscles of the gallbladder relaxes releasing bile component in concentrated form which flows into the duodenum.

Nervous system also helps in bile release from the gallbladder. Nerve impulses initiated from the vagus nerve of the upper gastrointestinal tract can help in releasing bile. Presence of food particles in the stomach automatically triggers the nervous system to stimulate gallbladder for the release of bile. Approximately within an hour of eating food the gallbladder produces enough of bile needed for fat absorption. In addition to the above, certain digestive hormones like secretin can also help in stimulating bile secretion. The main task of secretin is to stimulate volumes of water and sodium bicarbonate required to mix with the food particles so that the stomach acid can be neutralized. 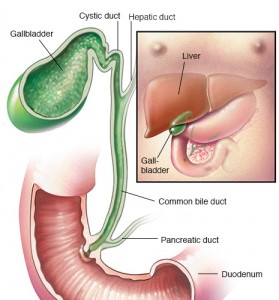 Bile production can get reduced due to many factors and diseases. Since bile is produced in the liver, any impairment of bile secretion can be diagnosed from liver disease. Enlargement of liver (inflammation), jaundice, bleeding in the liver, liver infection and vitamin D deficiency can affect the normal secretion of bile in the liver. The cholesterol level in the blood would increase gradually causing complications like stroke or even an attack. Any problem in the gallbladder can drastically affect the normal bile flow since it is the storehouse of bile. High cholesterol level is a sign of low bile secretion. Chronic infection, low antioxidants, injury, fatty liver and poor nutrition is a sign of high cholesterol.

Any injury to the cells can lead to break down of its contents including cholesterol. Excess of cholesterol is normally removed by the liver. But when the liver is not able to function properly due to infection or inflammation it can lead to accumulation of cholesterol level in the blood causing many problems. Liver is the only vital organ that decides and regulates the secretion of bile which checks the cholesterol level. Bile deficiency can be easily detected by the color of the stool. If the stool has no brown or yellowish shade in it then it can be due to liver problem or bile deficiency. Bile is responsible for giving the necessary color (yellowish brown) to the stool. Similarly oily deposits in the stool with foul smell are indicative of liver problem or bile deficiency. Since fats are not fully absorbed and digested fat particles is found floating in the stool giving oily coating.

BASD (Bile Acid Synthesis Disorder) can be diagnosed by clinical testing procedures. Liver biopsy and specific serology test are largely done for detecting bile insufficiency. Tiny tissue sample of the liver is taken surgically and examined under a microscope for diagnosing the cause of cholestasis. Blood, urine and bile fluids are tested in the laboratory for ruling out specific causes. Fast atom bombardment spectrometry test can be used.

Liver specialists are known as hepatologist and they are expert in treating any kind of liver problems. Treatment involves in directing specific symptoms of the concerned person. Bile acid replacement therapy can be done in the form of oral pills in the form of cholic acid (cholbam) until the symptoms are improved. The drug therapy is to be continued for several weeks or even months as per the instructions of your doctor. Individuals with oxysterol 7 alpha hydroxylase deficiency and n acetyltransferase deficiency can be treated with cholic acid treatment.

Include lemon juice regularly in your diet schedule since lemon is capable of stimulating liver function. Fish oil, flaxseed oil and other omega 3 acids can be taken daily. Fatty foods like dairy products, cakes and bakery items can be taken. Include bitter vegetables and sulfur rich items like cabbage, onions, radish, beetroot and cauliflower to improve liver and gallbladder function. Green tea, peppermint tea can be taken liberally. Salmon, Mackeral and Cod fish is capable of increasing Omega 3 fatty acids in the body. Probiotics like yoghurt can enhance good bacteria in the GI tract improving gallbladder function. Amino acids like lecithin, choline and taurine can also aid in improving the functions of liver and gallbladder. Amino acids are highly effective in detoxifying the liver thus improving bile secretion.