Menstrual cycles are not the same each month. One time there can be heavy vaginal discharge and the next time there would be light bleeding. It is normal to have some blood clots during the monthly periods but it can be a matter of concern if it gets intense along with other symptoms like fatigue and abdominal cramps.

If you are passing heavy blood clots in your periods, it is definitely a matter of concern. You need to consult your doctor promptly if you have such heavy bleeding with plenty of blood clots. For many women few blood clots can be present in the first day of monthly periods and not on consecutive days. Heavy bleeding and intense blood clots can be due to underlying problems. Several factors like anemia and intake of hormonal drugs can influence the rate of vaginal bleeding.

Having monthly period indicates that you are healthy and your reproductive system is good. It is a definite sign of the process of ovulation and secretion of sex hormones like estrogen and progesterone. It is true that some women (or most of them) may have premenstrual syndrome and other signs like headache, mood swings, depression and fatigue before the onset of period which gradually disappears on the first or second day.

Ovulation is the process during which certain hormonal changes stimulate the ovary to produce an egg. Ovulation happens about 12-16 days before the next monthly cycle starts. Eggs are normally stored in ovaries and one of the eggs is released from the ovary which is fully grown and ready for fertilization. During this process plenty of estrogen is produced and the uterus prepares itself for the fertilized egg by making a thick inner lining of endometrium.

This egg can get fertilized if it meets the sperm and fuses with it and which can be done only up to 24 hours after the ovulation process. Once the egg does not get fertilized the uterus shed off its inner lining tissue which is nothing but vaginal bleeding.

For a healthy woman, menstrual cycle occurs anywhere from 28 to 35 days.

Symptoms Of Blood Clots During Period

It is normal to have few blood clots with heavy menstrual bleeding. But you need to check with your doctor promptly if you experience any of these signs :-

How Blood Clots Are Formed ?

As the uterus gets ready for holding a baby once it gets fertilized it forms thick supportive endometrial tissue. Normal bleeding can happen easily from the uterus and expelled through vagina. But for release of blood clots excess of pressure is required. Hence if there is heavy menstrual bleeding (more volumes of blood than regular) it could push the blood clots which get discharged via vagina.

You can expect blood clots from your vagina when there is heavy bleeding (probably on the first day of the period). The color of the blood can be dark brown or even black during such time. Uterus contains fibroids (small cyst like growths) in them which are gradually expelled through vagina along with normal bleeding. Thus presence of fibroids can cause blood clots during monthly period.

Miscarriage can occur to pregnant women during the first 2-3 months of pregnancy. Recent miscarriage or abortion can cause release of leftover blood clots or tissue clumps along with vaginal bleeding.

For some women there would not be balance in two vital sex hormones estrogen and progesterone. Such an imbalance of hormones can trigger formation of blood clots which gets released during period. Hormonal changes and imbalance can occur due to stress, intake of certain medications or sudden increase in weight.

After pregnancy, uterus takes some time for returning to their normal size. In such cases walls of the uterus remain enlarged helping in the storage of blood for more time than normal. Since the blood remains for extended time it is likely to form blood clots.

Blood clots can be formed when there is any interruption in the normal blood flow to the cervix region. Menopause can cause this condition slowing down the blood flow leading to formation of blood clots. Adenomyosis is a rare condition in which the thick uterine lining forms outside the uterus. This can cause heavy bleeding along with blood clots. 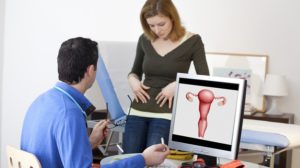