It is quite common for many children and even adults to break their nose while sports events or accidental injury. There can be profuse bleeding from the nose and it looks crooked. Your doctor can tell you if the nose is broken or not by examining it. Fall from motor vehicle and fighting are some of the common causes for broken nose. The bridge of the nose gets broken and often treatment is given for realignment of nose. In very rare cases surgery is done for repairing the broken nose.

Your nose will start bleeding and there will be enough pain. The nose will take crooked appearance or bent in shape. For many people there would be inflammation of the nose and the surrounding area. There will be a grating sound if you touch the nose or slightly rub it. The nasal passage will get blocked causing discomfort. It can cause difficulty in breathing due to swelling of nose. The nose loses its original shape and looks somewhat bent or crooked on its tip. The bridge of the nose gets collapsed forming perforation.

Often the nose gets broken during fights, fall from motor vehicle and accidental injury.

Physical examination of the nose can reveal that bridge of the nose has broken. Your doctor may request for CT scan or X-ray for further evaluation. He would gently press on the nose tip and look for nasal passage for signs of breakage. 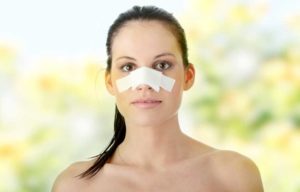 Once there is bleeding from your nose, you have to apply ice on it and keep your head in elevated position. You can take Tylenol for reducing pain. Sometimes you may lose more blood from the nasal septum and it can lead to epistaxis (nosebleed without clotting). Your doctor would look for possible fracture by physical examination or studying the X-ray. If necessary he would pack the nose with splints or through nasal packing gauze.

Surgery (rhinoplasty) is the last option when the person is having complicated fracture. The surgeon would gently move the cartilage and place it on right position. He would give antibiotics to prevent further infection. You need to keep the package on the nose for at least 2-3 days for complete healing.

Closed reduction is the procedure that is to be done within two weeks of broken nose. The surgeon will apply nasal spray for numbing the area so that you will not feel any pain during the procedure. The nostrils are opened widely using speculum. He would then realign the broken bones or cartilages in the right place.

In case the broken nose has damaged the septum you will have obstruction in the nasal passage leading to difficulty in breathing. In that case, your doctor will do septorhinoplasty for repairing the broken nose.

When you see that somebody has broken his nose, you should act quickly. Ask him to breathe through the mouth and raise his head so that bleeding is reduced. Apply ice on the nose and its surrounding area to reduce swelling. This would also help him from intense pain on the nose. Take him to the doctor immediately if the bleeding does not stop.