The uterus of each woman is adapted to the process of ovulation. Ovulation is a gradual process and does not happen overnight. It happens once in every monthly period due to several hormonal changes. Eggs are retained in the ovaries waiting for the successful sperm to fertilize. When conditions are favorable, sperm gets fused with an egg forming a zygote. For accommodating this zygote the uterus prepares itself by forming thick lining of endometrial tissue. When there is no fusion this lining of endometrium is shed off in the form of vaginal bleeding.

Normally the vaginal blood is of red color and shedding of blood may lasts for 3-5 days each month. However, the color of vaginal blood can change due to several factors ranging from dark brown to bright red.

You will get to know the significance of vaginal bleeding and its color in this article.

Women get menstrual periods in the form of vaginal bleeding as the extra inner lining or endometrial tissue is shed off. Blood from the vagina takes enough time to travel till the exit point of vagina. If the fertilization does not occur, then the corpus luteum (yellow tissue) would start producing estrogen and progesterone for a week or two, gradually reducing the level of hormone produced. Once the levels of hormone production stops, small arteries that keep nourishing the uterine lining (endometrium) closes. This causes lack of oxygen and nourishment to the uterus lining which in turn starts breaking off approximately 14 days after ovulation. This is the process of menstruation or vaginal bleeding.

During monthly period, extra tissue lining is shed off mostly but sometimes the last layer of lining remains intact in the uterus and waits for next ovulation cycle. This layer when discharged next time of menstrual periods can cause dark brown bleeding. For some women this tissue lining may get discharged couple of days after monthly periods causing brown colored bleeding. Strains of dark brown blood of retained lining of menses can occur after finishing the period.

2. Loss Of Oxygen In Hemoglobin

Hemoglobin is nothing but protein particle of red blood cells and it is normally bound by oxygen molecules. Once the blood comes out of blood vessels hemoglobin tend to lose its linked oxygen molecules causing dark red or dark brown colored bleeding.

Certain kinds of birth control hormones can induce fast degradation of blood cells causing discoloration which in turn leads to dark brown vaginal bleeding. For some women it may even cause blackish red bleeding owing to the chemical reaction of drugs.

Infection is another common cause of brown vaginal discharge. Infection can occur anywhere in the reproductive system of women like vagina, cervix, uterus and fallopian tubes. Bacterial infection act upon the blood to decay it causing dark brown colored bleeding through vagina. It is often accompanied with pain and foul smell indicating an infection. Women affected with sexually transmitted diseases infection can get brown vaginal bleeding.

There are some circumstances during which women cannot afford to carry their pregnancy and they opt for induced abortion. Getting a shot of abortion injection or taking abortion pills can result in sudden expulsion of uterus lining and its contents resulting in brown vaginal discharge. In such cases it can cause brown clots or black colored bleeding. Even after manual abortion like D&C some women are likely to get brown spots of blood leakage for few days after the procedure.

During pregnancy, the uterus gives room for protecting the growing fetus creating extra thick lining through which nourishment is provided. During sudden abortion (due to some cause) remaining portion of the fetus and parts of inner lining of the uterus would get discharged slowly even several days of miscarriage. It is vital for women to check with a gynecologist whether they need to undergo D&C procedure even after abortion to expel the remnants inside.

Cervical cancer in any form can cause brownish vaginal discharge. It can be seen as spots which may increase in quantity gradually as the cancer grows in size.

8. Fibroids In The Uterus

These are benign (non-cancerous) growths in the uterus varying in size from small to large masses. Fibroids can be single or multiple and can cause heavy bleeding with extended days. Some other symptoms related with uterine fibroids are frequent urge to urinate, backache and pain in the pelvic region.

Pelvic Inflammatory Disease is a serious problem causing painful vaginal bleeding accompanied with other symptoms like fever, nausea and severe pelvic pain. If left untreated PID can cause infertility in women. 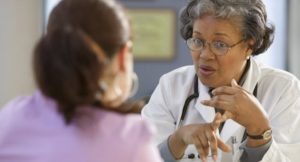 Vaginal bleeding is dark red in color under normal condition. However brownish blood leakage from the vagina is not common but not a matter of concern if there is no other symptom.

Some of the symptoms related with brownish vaginal bleeding are :

If you have any of the above symptoms with brown vaginal discharge, you need to check your doctor promptly. It can be an infection inside.

Treatment for brown vaginal discharge depends on the cause.