You are here: Home / Information / Cerebellum

Cerebellum also called as little brain is found below the occipital and temporal lobes present in cerebral cortex. It is the area that controls movement, balance and providing equilibrium. More than 50% of the total neurons are present in cerebellum which is used for processing data. It contains thin grey substance that is densely folded and a sheet of white matter. Cerebellar cortex is the outer layer of cerebellum which has multiple folds in it.

Any damage to the cerebellum would cause serious impairments in posture and motor control. Actually motor commands do not originate in the cerebellum but it modifies the command obtained from the descending pathways for making accurate movements like walking, standing and sitting.

Functions of Cerebellum are Given Below :-

It is responsible for adjusting posture or position so that a person can stay balanced. It receives input from the receptors and processes it for making necessary changes so as to adapt the body for shifting the position. In case if a person has skull injury that has damaged part of cerebellum then he is likely to lose balance and fall down. He will always remain in the stereotyped posture for compensating this problem.

Many voluntary movements of the body are composed of action from different muscle groups which should coordinate in same fashion. Cerebellum is responsible for organizing such movements maintaining the perfect timing so that the body movements are normal.

Cerebellum is involved in motor learning. It plays vital role in fine-tuning and synchronizing the motor programs for making accurate movements through trial and error process. For instance one can learn how to hit the baseball or how to hold the bat in the right position for playing cricket is possible through motor learning process.

A person can learn any language easily only if his cerebellum functions well. Many other cognitive functions are managed through cerebellum.

Several studies have been conducted on patients with cerebral damage for assessing the symptoms of cerebellar damage.

Without coordination and message from the cerebellum many muscles do not join together for making the desired movement. Hence the person may show decomposed movement. In other words, the movement will be in stages and not coordinated. They cannot perform smooth movement and involve broken movement. For instance they cannot touch the nose using finger smoothly which involves coordination of various muscles from shoulder, elbow and wrist. The person having problem in cerebellum will slowly make shoulder movement, next he will move his elbow and finally he will move his wrist.

For a person with impaired functions of cerebellum making any movement for reaching the target will cause tremor. The tremor or shaking of hands will increase as he gets closer to the target. For lifting a teacup the person will move his hand towards the cup but it will tremble and shake back and forth before his hands touches the cup.

This is very common in people affected with cerebellar functions. It becomes more and more difficult to learn any new motor skills and practice the acquired skills correctly. 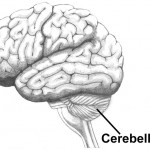 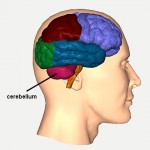 The person may show serious shortfall in attention, language and memory areas. In autistic children they show significant delays in learning any language. This can be due to damage or insufficient development of cerebellum.