Cervical stenosis is a condition in which the space of spinal canal gets narrowed thereby compressing the nerves in the neck. In Lumbar stenosis the lower back region gets affected and in the case of cervical stenosis pain develops in the neck. Cervical spine is composed of 7 tiny bones like structures called vertebrae wherein nerves that control the portion from head to chest region exist. Any compression of nerves in this portion would directly affect the neck, shoulder and hands causing pain and stiffness.

Aging is considered to be the main reason for cervical spinal stenosis. The disc may degenerate or bulge over years thus reducing the space. Sometimes the tissues or ligaments get thick putting pressure on the nerve endings. All these conditions ultimately lead to narrowed spinal canal. 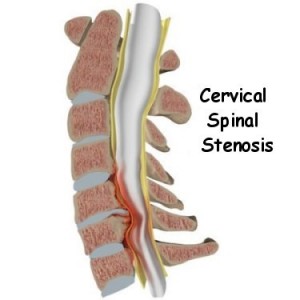 More often cervical spinal stenosis may not show any visible signs. Even if pain is felt on the neck and extremities it is considered part of aging process. Some of the signs of cervical stenosis include pain in the neck, pain in the hands/legs and rigidity and stiffness in moving shoulder and hands. Some people may have trouble in balancing while walking. If the nerves that passes to bladder gets affected it may cause incontinence.

Your doctor will closely observe the symptoms and health condition after making physical examination. He may order for X-rays of the affected part followed by CT or MRI scanning to get accurate picture of the compression. 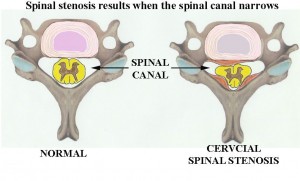