Chest congestion is loosely used to represent the myriad of symptoms which result when fluid and mucus accumulate in the lungs. Mucus is a natural gel-like substance which keeps the surfaces of tissues lubricated, traps harmful or potentially harmful substances and organisms, and keeps them away from entering organs.

The body produces a substantial amount of mucus each day and this is not a problem. However, when diseases occur or the body detects foreign substances and organisms, mucus is produced in excess that leads to accumulation in lungs.

Conditions Which Can Cause Chest Congestion 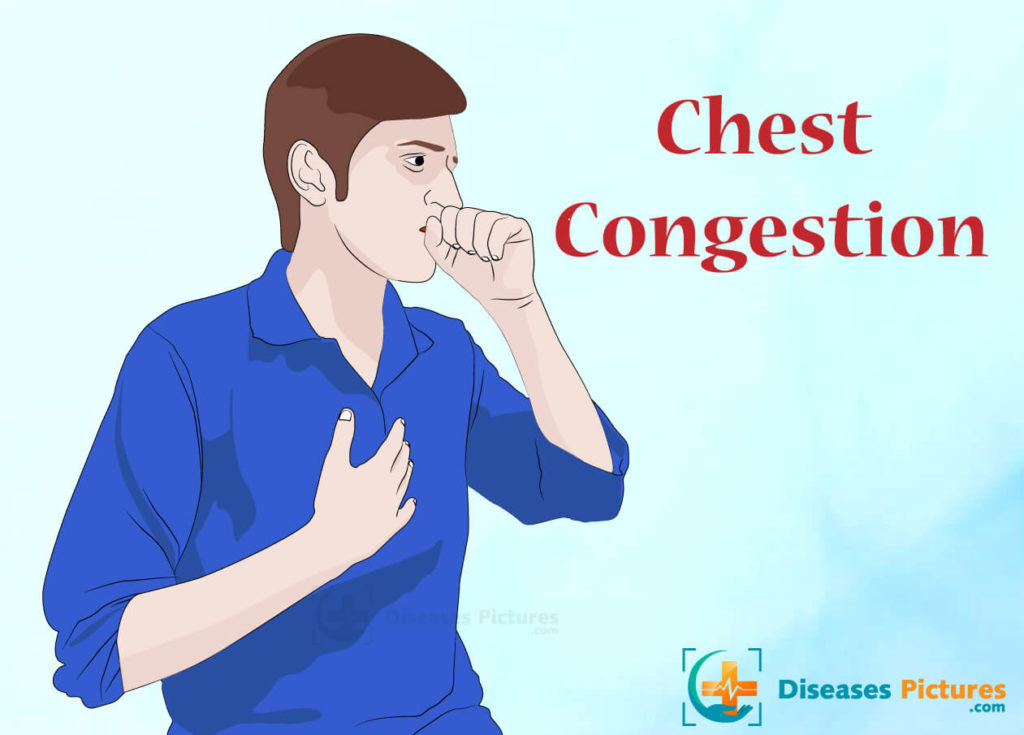 As the name suggests, cold is a common ailment and the cause for most cases of chest congestion. Cold is a viral infection which affects the respiratory system – the lungs, airways, nostrils.

Even though it often goes away on its own, it can present several distressing symptoms including severe headache, running nose, cough, sore throat and fever. Increased mucus and fluid production is often a way for the body to fight the virus and clear the disease even though this results in the unwanted symptoms which afflict us.

Common cold is generally not cured because it resolves on its own. Therefore treatment is often tailored toward reducing symptoms while the body fights the infection. Drinking a lot of fluids, eating a lot of fruits, rest, and hot water therapy are common but useful home remedies to provide relief from symptoms.

Allergies which affect the respiratory system and common cold are often difficult to distinguish as they share common symptoms. They are all considered as cold; however, allergies are not infections – allergies result when the body responds to foreign substances which are potentially harmful.

The increased mucus production which results in chest congestion is the body’s way of trapping these substances and moves them away from the lungs. Allergies may present with symptoms similar to cold – including cough, runny nose, sneezing and headaches.

Allergies are commonly treated with drugs like antihistamines, mast cell stabilizers and steroids. However, the best way to treat allergy is to identify what the body is reacting to and without this isolation; allergies may recur even after treatment.

Pneumonia is a potentially life-threatening infection of the lungs commonly caused by bacteria even though viruses and fungi are also causative organisms. It usually starts off like common cold and may be insidious until severe symptoms including coughing up coloured or bloody mucus, fever, shortness of breath, chills and increased chest congestion evolve.

Pneumonia must be taken seriously and any condition like cold which persists with worsening symptoms warrants an examination by a doctor. Pneumonia may resolve with home remedies, however, serious forms may require aggressive treatment with antibacterial drugs and hospitalisation.

Bronchitis results when the bronchioles, the tubes which convey air from the nostrils and mouth to the lungs, get inflamed. An inflammation is one of the body’s ways of fighting diseases. The processes involved in achieving this often results in unwanted symptoms like pain, swelling and redness.

When the bronchioles are swollen, passage of air is inhibited and this may result in shortness of breath or painful breathing. Other symptoms of bronchitis include coughing up phlegm, fever, chills, chest discomfort, headaches and frequent tiredness.

Bronchitis may be caused by viruses just as with common cold, however, most cases have been attributed to long-standing cigarette smoking – secondary smokers or people who inhale smoke from another person smoking are also at risk.

Other triggers may include chemicals, dust or grains. Bronchitis resulting from long term smoking is often chronic, lasts for more than three to six months and irreversible. Other forms caused by irritants or infection may resolve on their own or respond to treatment.

Tuberculosis is a bacterial infection of the lungs caused by Mycobacterium tuberculosis, bacteria which can present in the body without causing harm until a person’s immunity is weakened. It is potentially serious and highly contagious. It is air- borne and can spread if a person inhales infected air – the bacteria often thrives in from droplets in the air.

Symptoms of tuberculosis may be severe like pneumonia and often include cough with coloured or bloody phlegm, chest pain, chills, weight loss, chest congestion, fever, loss of appetite, frequent tiredness and night sweats. While it is primarily a disease of the lungs, it may affect other organs including the kidneys.

Management of tuberculosis involves home remedies like keeping your room ventilated, drinking a lot of fluids and rest. Because it is contagious, it is also necessary to take measures to prevent spread. An infected person should keep away from public gatherings, cover the mouth as much as possible and especially when laughing, sneezing or coughing and maintain good hygiene.

Chest congestion can result from congestive heart failure and this is probably the most life-threatening cause. It results when the heart muscle does not receive enough blood supply and gets damaged. In consequence, the heart is unable to pump blood, and the body organs are starved of nutrients and oxygen.

This also pushes blood and fluids back into the lungs and set the stage for subsequent death if timely intervention is not undertaken. The brain dies and the rest of the body dies – the brain in particular, cannot survive for long after inadequate supply of oxygen. Diseases which can lead to heart failure include hypertension, coronary heart disease, diabetes, obesity and thyroid disease. Symptoms of congestive heart failure include swelling in the feet, weight gain, coughing, irregular heartbeat and shortness of breath.

This is a serious condition and thus any chest pain must be reported to a doctor promptly. Treatment is often tailored towards the disease or condition. However, if the outcome of initial intervention doesn’t works, a heart transplant may be resorted to.

Most people feel chest congestion as an uncomfortable tightness in the chest.

What Does It Mean When Your Chest Is Congested?

Chest congestion generally refers to an accumulation of mucus and fluids in the chest, often as a result of diseases or the presence of a potentially harmful substance or organism.

What Can I Do To Get Rid Of Chest Congestion?

The following may help to relieve chest congestion: