Chlorine is a harmless chemical used in industry and even in some household produce. Chlorine exists as a yellowish green colored gas but it can be compressed to form a liquid for storing purpose. Chlorine has peculiar pungent odor smelling very much like bleaching agent. It can be easily detected if exposed owing to its pungent smell.

Chlorine is largely used in producing many pesticides and solvents and also in paper and clothing industry. Chlorine can be used in drinking water (in small quantities) and for cleaning industrial waste and sewage. In swimming pool or any form of stagnant water chlorine is used for killing bacteria.

Chlorine poisoning is a condition in which one inhales chlorine gas or swallows liquid form of chlorine accidentally. This chemical reacts with water forming HCL (hydrochloric acid) which is poisonous. Often chlorine poisoning cases occur due to ingestion of household items like bleaching powder and cleaners, that contain chlorine and not due to swallowing pool water.

In What Ways Chlorine Can Become Poisonous?

Any sudden outburst of chlorine gas in the air is poisonous as it spreads quickly. People can easily inhale it while breathing which can get into the lungs causing complications. The gas can enter the eyes or even skin causing severe irritation. Chlorine (gas or liquid) as such is not poisonous, but it reacts with water inside the body to form hydrochloric acid which is highly poisonous. Chlorine ingestion can occur if a person happens to drink chlorinated water and by eating chlorinated food.

Shortly after the exposure to chlorine gas/liquid the concentration of chlorine in the blood increases causing blurred vision and burning sensation in the eyes, nose and throat. The skin would become irritating forming blisters and bumps causing redness and pain. The person would start coughing continuously leading to shortness of breath and choking. Some people would lose conscious due to difficulty in breathing. All the above symptoms include chlorine poisoning in the form of liquid.

In case an individual inhales chlorine (in excess) in the form of gas leakage, it can cause signs of nausea, vomiting, shortness of breath and wheezing. Due to excess of fluid accumulation in the lungs it may lead to pulmonary edema. Chlorine poisoning would affect your entire body affecting many vital systems. Level of acid in the blood would suddenly increase causing serious consequences. For some people, vision loss can occur due to persistent irritation and burning sensation of eyes.

Critical Steps To Be Taken : 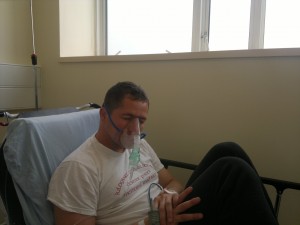 No special tests are needed to detect chlorine poison, since the symptoms are self explanatory.

Once the person is taken to the emergency room the medical staff will do all the possible steps to stabilize the patient. He would be given supportive oxygen to remove excess of chlorine from the body. In the meantime, your doctor will collect information about the amount of chlorine inhaled or swallowed and how long the patient was exposed to chlorine.

The patient will be put on breathing tube if he has serious problem in breathing. Doctors would check the condition of the throat to know the damage caused to the airways or lungs. After stabilizing the patient, thin tubing would be inserted into his stomach to flush off all the chlorine inside. The eyes will be washed with plenty of fresh water to remove excess of chlorine if there is eye irritation. No antidote has been discovered to treat chlorine poisoning.

If the patient is admitted to the hospital quickly there is more chance for survival and recovery. The more the delay and more the exposure of chlorine, the worst will be the outcome. In severe cases of chlorine poisoning, survival rate is very low.

Take effective measures to store chlorine household products in closed closets and out of reach of children. Call the poison control center immediately to know the methods of treating the patient before taking him to the hospital.