COPD is the abbreviated form of chronic obstructive pulmonary disease. It includes various types of lung related diseases like emphysema, chronic airway disease and chronic bronchitis. An individual affected with COPD will have breathing difficulty due to the obstruction in the airway passage. He/she would have frequent chest infections, persistent cough and breathlessness. Smoking is the main cause for developing COPD apart from environmental factors. The symptoms of the disease can be managed by medications and other mode of treatments but the damage done to the lung through smoking cannot be reversed.

How Does It Happen?

When a person smokes he inhales the tobacco packed fumes. He would persistently increase the smoking period by getting on to the habit. This in turn causes inflammation of the lungs leading to scarring of tissues. The smoke would irritate the soft lining of the lungs and if it continues for long-term it results in scarring. More amounts of mucus are secreted from the lungs and the soft air sac of the lungs gets damaged. This would lead to emphysema causing symptoms of persistent cough, breathlessness and frequent lung infections.

Initially there may not be any symptoms at all, but once significant lung damage has occurred many symptoms would appear. Persistent cough, shortness of breath, tightness in the chest, wheezing, excess of mucus secretion and frequent respiratory infections are some of the symptoms of COPD. The first thing you would do in the morning is to expel mucus that has secreted overnight in your throat.

The color of the mucus can be plain white, yellow or greenish yellow. For some people, it can cause cyanosis leading to bluish fingernails or lips. In final stages the disease can cause sudden weight loss. Exacerbation is the period in which the symptoms can go worse and may continue for weeks or even months together.

Smoking is the main cause for chronic obstructive pulmonary disease. It can be either active or passive smoking. It need not necessarily be cigarette smoking alone but it can happen to women who are exposed to fuel smoke or cooking smoke. The air sacs present in your lungs would gradually lose its elasticity thereby trapping some particles of air inside.

This in turn would lead to emphysema and chronic bronchitis thereby blocking the narrow airways and secreting more of mucus. Apart from long-term cigar smoking, genetics can also cause COPD. The children born to parents with this disease are more likely to develop this problem than others. Exposure to organic fumes, irritant fumes and other chemical waste can also cause COPD. When alpha antitrypsin ( a type of protein) gets lowered in your system it may affect the lungs as well as liver leading to COPD.

COPD develops normally above 35 years and is considered to be the most common respiratory disorder in many countries. People who are exposed to tobacco smoke such as pipe smokers are at risk. COPD is likely to develop in people with asthma and other lung infections. People whose workplace gives more exposure to chemical fumes are at risk.

In severe cases, COPD may develop into serious respiratory infections like flu or pneumonia. It may also cause heart disease, hypertension (increased blood pressure), and lung cancer. In most of the cases, COPD is not diagnosed properly and most of the smokers assume their cough as casual one.

Your doctor would examine your body and look into the medical history. He may order for pulmonary function tests like spirometry to measure the lung performance. He would also request for chest X-ray and/or CT scan of your lungs to check for emphysema and ruling out lung cancer.

COPD can be treated and managed well with effective medications and therapy. The first step of treatment is to stop smoking. Nowadays plenty of rehab centers are available to help you out of smoking habit. In case you are exposed to secondhand smoking then you need to take precautions to stay away from smokers. Bronchodilators are often recommended in the form of inhalers or oral pills for clearing the airway block. It would give good relief from persistent cough and shortness of breath. Depending on the severity of the symptoms, your doctor would prescribe suitable bronchodilators for managing your activities. Some of the effective bronchodilators are Atrovent, Ventolin HFA, Proair HFA, Spiriva, Serevent and Brovana.

Corticosteroid is also prescribed for reducing inflammation in the airway and to prevent exacerbations. Hoarse voice and oral infections can be treated with steroid medications like Flovent and Pulmicort. These medications are inhaled in controlled doses for clearing the airway block and to help breathe easily. For some cases, doctors prescribe combination of both corticosteroid and bronchodilators. Oral steroids if taken for long period can cause side effects like weight gain and osteoporosis.

Phosphodiesterase 4 inhibitor is given for severe cases of COPD for relaxing the muscles and clearing the airways. In case of severe respiratory infections, antibiotics are prescribed. Lung therapies are given in addition to medications for improving the quality of life of the patient. Oxygen therapy is suggested for patients who have less of oxygen in their blood. Portable units of oxygen machines are available. For some cases, combined therapy of medications and exercises are recommended.

In case of acute exacerbations, symptoms may worsen causing severe infection and even lung failure. Hence taking prompt treatment is necessary. Surgery is done only in case of severe cases of emphysema and if the patient is not responding to any type of treatment. The surgeon would remove the damaged part of lung tissue for improving the functioning of the lungs. In rare cases, lung transplantation is done which carries significant risks.

People living with COPD should take effective steps for improving quality of life. They should consult lung therapist for knowing how to breathe efficiently using special techniques. Learning relaxation therapy will prevent shortness of breath. Using humidifiers and drinking plenty of warm water can help in clearing the airways. Doing regular exercise will improve your overall health and also will strengthen the respiratory muscles. Avoid foods that trigger cough and mucus. Eat healthy foods to manage healthy weight. Avoid going to places of smoke-zone and also stay away from areas of air pollution. 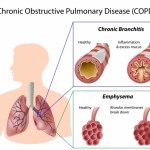 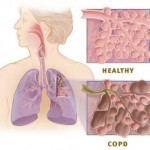 Never smoke in your life to prevent COPD since smoking is the major cause of developing this disease. In case you are smoking for longtime then it is time to find out ways for tobacco cessation to prevent further damage to your lungs. Wear masks that would prevent your lungs from getting exposed to chemical fumes in case you are employed in such fields.