A concussion is a sudden brain injury that occurs due to trauma, motor accidents or fall. Any blow to the head can easily affect the brain and alter the way it functions. Sudden headache, confusion, dizziness, slurred speech, loss of balance and poor concentration are some of the common symptoms of concussion. Concussions occur commonly in athletes and many times they don’t realize it immediately since it may not cause confusion or any sudden changes immediately after injury. Any injury caused to the brain needs some time for healing. Concussions that occur after trauma are sometimes mild and hence recovery is full in such cases.

In medical terms, concussion can be defined as change in brain function, change in mental status that develop due to sudden trauma or blow to the head. All people having concussions will not lose consciousness. Concussions may vary from mild to severe and can affect your memory and judgment skills. According to neuro experts, any concussion should not be taken as mild.

For some people signs and symptoms does not occur immediately after trauma or fall and can be subtle. Some of the common symptoms of concussion are headache, amnesia, confusion, loss of memory and balance, poor concentration, dizziness, nausea, vomiting, slurred speech and ringing in ears. Some people appear dazed for few seconds after a fall or head injury and recover within minutes.

For many people, symptoms are delayed by hours or even days or weeks after injury. Such signs of concussions include irritability, poor concentration, poor memory, disturbed sleep, light/noise sensitivity and psychological problems like depression. Infants and young children may not be able to tell what they feel. In such cases, parents can check for clues like irritability, excessive crying, appearing dazed, loss of balance and change in eating and sleeping patterns.

How Does This Happen?

Your brain is fully protected by the skull from any type of trauma or injury. Brain is enveloped by special liquid called cerebrospinal fluid which provides cushioning effect. However any abrupt blow or fall with violet force can seriously affect the brain resulting in tearing of blood vessels and nerve fibers. Sometimes, head injury can cause microscopic damage to the brain cells that may not be visible even by CT scan. The tissues of the brain can develop swelling and compress the brain and its substance thus affecting the normal blood flow. In severe cases the brain becomes deprived of oxygenated blood and can cause stroke.

Any fracture to the skull can also affect the brain substance causing inflammation and bleeding. Seek immediate medical treatment if you have symptoms like motor dysfunction (impaired motor function), severe pain (headache), impaired cognitive function (difficulty in concentrating, confusion, disorientation etc) and slurred speech. These are serious symptoms that need to be treated at once.

Sudden injury to the head like fall or violent force can cause concussion. The brain substance will suffer a jerk movement back and forth and bombard against the walls of the skull during violent blow to the head. Motor accidents, sudden fall and head injury during sports events are the major causes of concussion. 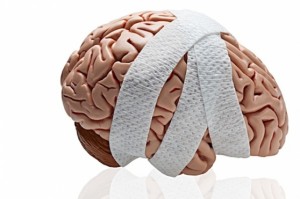 Sportsperson who have had previous concussions, getting involved in contact sports like football or hockey, being a victim of bike accident and soldiers who are combating the nation are at high risk of developing concussion. Some concussions can cause complications like epilepsy, disability of mental function, post concussion syndrome and severe headaches.

Your doctor will hear from you about sudden blow or injury to the head and evaluate your vision, hearing ability, balance and other sensation. He may ask you few questions to judge your memory and your ability to retrieve information. He may order for imaging tests like CT scan, brain X-ray or MRI scanning. Various other tests may also be done depending on the condition of the patient.

The mode of treatment varies according to the stability of the patient who suffered a concussion. Taking complete rest can improve most of the symptoms if the blow is mild. You can take leave for few days from school or office and not involved in any type of vigorous physical activity. Mild to moderate headache can be treated with acetaminophen or other pain killers.

People who had post concussive syndrome may need long-term treatment that involves neurological as well as psychological intervention. Some people may develop anxiety, depression, mood swing, and change in personality and sleep disturbance after concussion. If you have had multiple concussions, you should not return to sports in future. In rare cases, when a second concussion occurs before complete healing of first concussion, it can cause fatal brain swelling and lead to death.

Always wear protective gears and helmets while involved in any sports activity. Choose the right size that fits your head aptly. Safety experts recommend wearing head gear by people involved in soccer and martial arts. While riding bike wearing helmet can reduce the damage done to the brain in case of accident. Never drive your car after drinking and always wear seatbelt while driving. Educate your children about the seriousness of fall and head injury.