Cretinism describes a disease that occurs due to severe reduction of thyroid hormone which is congenital (by birth) in nature. This phenomenon can cause severe retardation of physical and mental growth. Cretinism is also known by other names like “salt deficiency syndrome” and “congenital iodine deficiency syndrome”. Cretinism can also occur in infants and more girls are affected than boys.

Cretinism is broadly grouped under 2 categories.

People (and infants) born with cretinism have marked features that distinguishes them from others. They have a short and wide face with low hair line. The base of the skull portion is short and narrow when compared with the frontal portion. Their mandibles are under-developed and maxillas are over-developed.

Their tongues are unusual in size and protruding in nature. Infants born with cretinism are sure to have developmental delays in motor function. It may take sufficient time for their permanent teeth to develop. These people do not have end part in their long bones as normal people have. Each bone has a pineal or end part which grows separately from the shaft which is known as epiphysis. For infants with cretinism epiphysis is totally absent or in some cases it may appear in later stages of development. 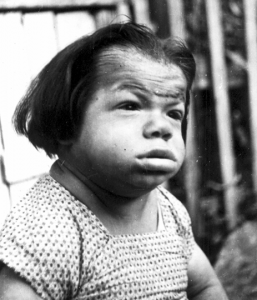 The skin of people born with cretinism would be dry and rough in texture. Their face and tongue are swollen and inflamed. These children often indulge in drooling from the mouth. And most importantly, these infants have problems in feeding and often develop choking problem during childhood. They have slight to moderate mental retardation which can cause reduction in learning and other skills. In addition, such children can develop heart related problems like valve abnormality and breathing difficulty.

More female infants than males are at risk of cretinism. Children belonging to Hispanic community and white complexioned children are at high risk.

Cretinism can be detected by pediatrician in the early weeks of infancy. Doctor can detect various features given above in the first 2-3 weeks after birth. Testing procedure include hormone tests, thyroid scan and other radiography methods like X-ray and ultrasound scanning. 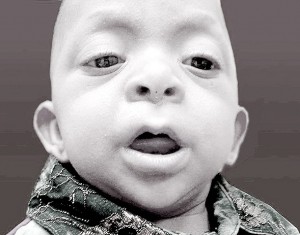 Not much can be done for treating cretinism related symptoms since it is of birth origin. In case of hormone related problems suitable therapy can be initiated in the form of supplemental hormone injection or in the form of oral pills. In most of the cases, hormone therapy is started within few weeks of birth and continued for long term.

Impairment in mental ability cannot be treated or repaired. Infants that are detected and treated in early stages of life can show normal intelligence. The more the delay in treating the child the more would be the impact of disease causing mental and physical retardation. If treated is not initiated in the first few weeks of life irreversible damage can occur.

Iodine quantity should be stabilized in the diet to prevent cretinism. Major cause of this disease is deficiency of iodine and hence screening should be done for pregnant women at early stages and sufficient iodine intake is recommended to prevent cretinism. Children with cretinism can show symptoms like poor growth, short stature, and delay in development. Girls with thyroid deficiency would not attain puberty or severe delay in puberty.