Dementia is characterized by memory loss and several other symptoms that affect your daily routine activities. This disorder is marked by impairment of mental functions like thinking, reasoning and memory. Dementia is not a disease by itself but reflects a group of symptoms that affect one’s social abilities. A person having loss of memory alone does not indicate that he has dementia. Individuals affected with this disorder will have impaired judgment and inability to carry on certain daily activities like checking calls, paying bills etc. People with dementia will even forget the names of intimate people and there will be changes in their behavior. Dementia is treatable based on certain types.

Some of the common symptoms of dementia are loss of memory, poor concentration, difficulty in talking, difficulty in organizing things, problems in orientation, impairment of motor functions, impaired judgment, changes in personality, agitation, paranoia and hallucinations or day-dreaming. Symptoms may vary with respect to the intensity of damage caused to be nerve cells of the brain.

Vascular dementia in one in which blood supply is insufficient to the blood vessels of the brain. It can occur due to heart problems or stroke or circulatory disorders. Frontotemporal dementia is a rare form that attacks young adults of age group of 35-40. It occurs due to the degeneration of nerve cells on the frontal lobes of the brain.

Dementia is believed to be caused by damage of nerve cells. Certain areas of the brain may get affected and hence it may affect the people in different ways. Dementia is grouped according to the area of the brain that is affected. Dementia can occur as side effect of certain medicines or infection and this stage is reversible if treated properly.

Dementia occurs due to degeneration of nerve cells, lack of blood supply to the blood vessels in the brain and toxic reactions caused by consumption of alcohol. Deficiency of vitamin B12 and folic acid deficiency can cause dementia. Dementia can occur due to infections like AIDS or Creutzfeldt Jakob disease that affects the spinal cord and brain. Swelling of brain tissues due to excess of fluid can cause this problem. Head injury, brain tumors and chronic injuries that occur due to repeated falls can affect the functioning of brain. Certain illness in the liver and kidney can cause dementia.

People of old age (65-75 years or even more) are likely to develop dementia. Some form of dementia is observed in about 5-8% of people above 60 years and about 50% of the people above 80 years will have dementia symptoms. Individuals with family history of dementia are likely to develop this disorder in old age. People with genetic mutations may suffer from dementia. You can reduce the risk of getting dementia by reducing alcohol intake, by managing blood pressure and cholesterol, and by reducing your weight and controlling diabetes.

Dementia caused by substance abuse or alcohol (in excess), brain tumors, hypothyroidism and hypoglycemia, and hydrocephalus and other forms of dementia caused by metabolic disorders can be treated fully.

Dementia That Cannot be Treated :

Dementia in long term can affect the normal functions of your body systems and you may end up with inadequate nutrition, and lack of hygiene. Some people will have difficulty in taking medications, difficulty in communicating, and sleeping problems. 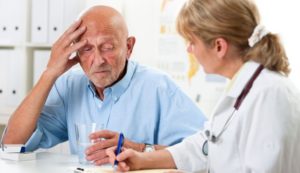 Your doctor will collect the medical history after physical examination. He may order for cognitive function test, neurological evaluation for detecting balancing and reflex action. He may conduct CT scan of your brain, blood culture for checking the nutritional level and (if required) refer your case to psychiatrist for psychological evaluation.

No treatment is available for dementia but doctors will give medications to control the symptoms. Cholinesterase inhibitors like donepezil, rivastigmine and galantamine are prescribed for boosting memory. Memantine drugs like Namenda is given for regulating the brain functions.

Based on individual’s symptom and intensity, your doctor may prescribe other medications also. Some people would need to learn occupational therapy for adjusting with daily activities. It would help you if you stay away from noisy environment and you can always simplify the tasks to perform it easily.

If your loved ones are suffering from dementia, you can talk slowly in simple phrases giving slow instructions. Motivate them to take part in physical exercises, games and other brain activities. Make sure that they are going to bed in regular time in relaxed mood and keep the lights on to prevent them from falling. Take help from support groups and other family members.

You cannot prevent dementia but you can reduce the risk. Engage in mind stimulating activities like puzzles and word games which would delay the symptoms. Do regular exercises and be active. Avoid alcohol and quit smoking. Keep your blood pressure under control and eat a healthy diet.