Disseminated intravascular coagulation is a condition in which the affected person’s blood has difficulty in clotting, thus leading to excess of bleeding. Sometimes it can cause failure of organ or even death if not attended immediately. It becomes life threatening problem when suddenly blood clotting metabolism is not able to function properly. The person may have internal or external bleeding causing excessive loss of blood.

It can affect the person in two ways. It will result in excess of clotting (thrombosis) wherein blood platelets will join together to block the blood vessels in the body, disrupting normal flow of blood. Other method is excess of bleeding which can damage internal organs causing death.

Disseminated intravascular coagulation DIC can be caused by many factors. But it is a rare condition affecting very less number of people. Severe trauma, accident or brain injury can trigger blood clotting. When the temperature of the body falls below average (hypothermia) it can cause blood clotting in excess. Sometimes it can occur due to viral or fungal infection. In rare cases it can develop due to complications that may occur during childbirth.

In severe types of cancer DIC is the first symptom to detect that something is wrong in the system. Severe poison from snakebite can cause this problem in some people. Excessive blood clotting occurs due to the release of certain chemicals into the blood during delivery or labor pain. Amniotic fluid can clot resulting in excessive blood clotting in many places of the body.

It can develop due to extensive tissue injury caused due to accident or trauma. Even burns (second or third degree burns) can cause this problem. This can occur as a side effect of blood transfusion when the body refuses to accept the donated blood. In rare cases, it can develop during prostate surgery.

If you have received blood from multiple persons recently or if you have had sepsis recently you are under risk of getting DIC. Severe head injury, surgical complications due to intake of overdoses of anesthesia and labor pain can trigger this problem.

Advanced leukemia will have DIC as the symptom. People who have serious liver disease are also under risk for DIC.

Blood hemorrhage can occur throughout the body when there is lack of blood clotting factors or chemicals in the blood. The intensity of bleeding may range from small red dots formation on the skin to severe internal bleeding. Heavy bleeding can occur on the body openings like mouth, rectum or even nose. If there are any surgical wounds on the body, it can start bleeding profusely.

Some of the symptoms of bleeding are shortness of breath (if lungs are affected), low discharge of urine (if kidneys are affected), stroke if brain is lacking proper blood supply and much more. In severe forms the affected person will have low blood pressure with severe shock and organ failure.

For milder form of DIC the body will compensate for blood loss. If there is minor blood clotting there will not be any symptoms except for slight bleeding from the mouth or nose.

Dissemination intravascular coagulation is difficult to diagnose. The doctor cannot understand the symptoms by single test and hence he may order for series of testing procedure including complete blood profile for detecting the amount of platelets, D dimer test to find out the extent of blood clotting and prothrombin time test for measuring how long the blood clots on the body.

Fibrin is the name of the substance released in the blood when clotting breaks up and fibrinogen test is conducted for measuring the amount o fibrinogen in the blood. 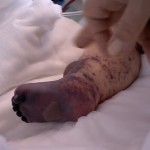 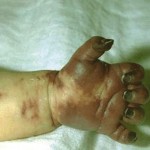 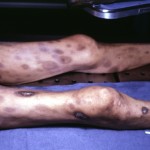 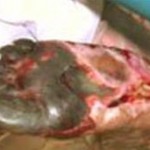 Treatment depends on the health condition of the patient and how severe the blood clotting is. Some people with acute form of DIC should be admitted in the hospitalization for treating with intravenous fluids and blood transfusion. Depending on the extent of blood loss the patient will be given medicines for blood clotting.

The doctor has to identify the factor that causes blood clotting or excess of bleeding before starting the treatment. He should treat the underlying cause quickly for fast recovery of the patient.

Frozen plasma protein is injected for replacing the low level of coagulation factors in the blood. Blood platelets are also given for correcting the low levels of DIC. Heparin is administered for cancer patients where other treatment methods do not respond. For some people, antithrombin is given for slowing down the process of clotting.