Concrete evidence of pregnancy comes in the form of urine test result and ultrasounds. But even before you go for such procedure you can identify some signs to indicate that you are pregnant. In this article, you will understand about some peculiar symptoms of pregnancy in depth which can help in clearing your doubts about pregnancy.

Every woman is unique in her thoughts, feelings and physique, so as the pregnancy symptoms. Morning sickness and fatigue may be present throughout the pregnancy for some women whereas few may not have such signs anytime during pregnancy.

Pregnancy is a process which lays foundation for bringing new life to the earth. Several physiological changes happen to woman for accommodating the new fetus inside her uterus. Firstly, uterus would prepare itself to give room for the fertilized egg to get implanted on its wall. Secondly, several hormones will come into play for facilitating the growth of zygote. Secretion of such hormones can cause mood swings and mild depression to the mother. And most importantly, the would-be mom would be immensely happy that she is pregnant.

Experience and expectations from pregnancy differ from one woman to the other. Some women can feel the very day that the egg gets implanted in the walls of the uterus that something is happening inside. Early signs of pregnancy like nausea, vomiting and morning sickness can start right from the fertilization day itself. Many new things can happen to pregnant women. The food she is fond of can now become the last preferred item and vice versa.

Though there are many signs and symptoms listed below as early signs of pregnancy, it is better to get it tested for the sake of confirmation. One concrete way of knowing that you are pregnant is by pregnancy test.

1. Onset Of Symptoms – As said early, not all the women getting pregnant would experience many symptoms given here. The severity of the symptoms varies widely on many factors like age, weight, and overall health condition of the woman and many other environmental factors.

Early symptoms of pregnancy can start as early as 2nd week of completed period. Expected delivery date will be calculated by your doctor based on the date of last menstrual cycle.

2. Spotting and Cramps – Ovulation occurs roughly between 14-17 days after your menstrual period and it is the perfect time to get pregnant. Hence two weeks after your monthly periods you have increased chances of getting conceived. Once the egg gets mated with a sperm fertilization occurs to form fluid filled cells. These cells are called blastocyst which would eventually (after 10-14 days) get implanted in the walls of the uterus. During this time, implantation bleeding occurs causing occasional spotting and cramps.

Spotting and cramps before your regular menstrual cycle can be an indication of early symptoms of pregnancy. Blood would be of pink or red color and spotting can be seen only when wiping. Implantation bleeding can cause symptoms similar to pre-menstrual period. 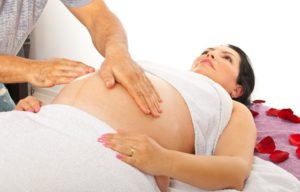 3. Missed Period – This is the real confirmation that you are pregnant. You would be missing your monthly periods on the dates you are expecting. Now conception of zygote has already occurred and it gets attached to the uterus. Your body secretes increased levels of hCG human chorionic gonadotropin hormone. You can probably do a home test for checking the levels of hCG to detect pregnancy. Eight days after the “expected period days” you can start doing urine test for detecting hCG levels.

4. Increased Body Temperature – Some women are likely to feel feverish soon after getting pregnant. This can be due to surge of hormones and plenty of changes happening inside. Early pregnancy symptoms can be detected by checking the basal body temperature. You may sweat more than normal during these days and make sure to drink plenty of water.

5. Morning Sickness – Nausea and vomiting are described as common signs of early pregnancy. It can begin as early as 4th to 6th week. As you wake up from the bed in the morning you may feel like vomiting. This can occur due to hormonal changes and it is quite normal in many women. Your body is preparing itself for the growing fetus in the uterus. Morning sickness is likely to reduce as the fetus grows and in many cases it would stop after 12 weeks of pregnancy.

6. Fatigue – Many women experience a state of fatigue during the first few weeks of pregnancy. They cannot perform their daily chores and feel unusually tired and sleepy. This can be due to increased secretion of hormones and it is good to take rest during this period. Basal body temperature can increase along with increased heart rate during early pregnancy which can also cause fatigue.

7. Palpitations – Your heart beat can increase and you may experience palpitations during pregnancy. This can be explained due to increased hormonal secretion. Your heart is likely to pump more volumes of blood than normal causing palpitations. If you are feeling discomfort you can better check with your doctor. Avoid taking any drugs on your own since it can affect the growing fetus.

8. Changes In Breasts – Some women can have tingling feeling on the breast along with pain. Your breasts would become swollen and tender due to sudden surge of hormones during the 4th to 6th week. It may continue till the 12th week also in many cases or until your body gets adjusted to the changes. Your breasts would grow in size and the nipple would experience tingling feeling. The region around the nipple can expand suddenly and become dark in color. You can choose any breast pads for reducing the nipple pain and friction in that region.

9. Changes In Mood – Increased secretion of estrogen after pregnancy can cause various problems like swelling of breasts, headaches and mood swings. Hormonal changes can bring in lot of physiological as well as mental changes. This perhaps explains the peculiar and overly sensitive behavior of pregnant women in the given circumstances. Progesterone hormone is responsible for creating the special “glow” of pregnancy and it also helps in the growth of fetus. Both these hormones help in transferring the required nutrients and formation of blood vessels in the fetus. And these hormones are the real causes for nausea, vomiting and fatigue in pregnant women.

The level of estrogen goes at its peak during the third trimester and it helps in enlargement of breasts and milk secretion. Increased secretion of hormones helps in loosening of joints and ligaments in the body, more particularly on the uterus region for accommodating the baby and helping in delivery.

10. Frequent Urination – This again is the most common problem during pregnancy. Many women would face the problem of incontinence (leakage of urine) throughout their term and is at its peak during third trimester. When a woman gets pregnant, her heart pumps more volumes of blood than before which in turn triggers the kidney to produce more volumes of liquid. Excess of such fluids is eliminated in the form of frequent urination.

11. Feeling Of Fullness – Your stomach would become full after eating small amounts of food. Bloated feeling is common among pregnant women and is prominent early symptoms of pregnancy. Digestive process of pregnant women get slow down due to increased hormonal secretion which creates “bloated” feeling and fullness. This can also cause constipation in many women.

12. Hypertension – Induced blood pressure is another common symptom of early pregnancy. Due to high volumes of blood pumped out of the heart, blood pressure increases which can also cause dizziness. Often this problem gets resolved within a month or two after pregnancy and your blood pressure gets back to normal. In some women, hypertension continues till labor time and settles down after the childbirth. You can consult your doctor to control blood pressure. Reduce salt intake in your food.

13. Food Aversion – It is quite natural for many pregnant women to have aversion for certain foods and likings for the other. Though there is no scientific evidence to support this theory, still it continues till second trimester of pregnancy. And pregnant women are strongly influenced by “smell” and indulge in vomiting even for slight trigger of smell.

14. Weight Gain – During the first trimester, weight can increase about 1-5 pounds. After confirming your pregnancy, you can get in touch with your dietician to take nutritious diet helping in the growth of fetus. Growing size of uterus, amniotic fluid, increase in the volumes of blood and fluids and other things contribute for weight gain during pregnancy. Eat balanced healthy diet and avoid eating fatty foods and sweets.

In many women, symptoms of bloated feeling, dizziness and nausea would disappear after two months of pregnancy. By the start of second trimester most of the early symptoms of pregnancy would vanish and you will feel better both physically and mentally. You can always discuss with your doctor if any of the symptoms are affecting your daily life.

Home test for pregnancy can be done 7 days after you have missed your period. The level of hCG hormone would be high indicating that you are pregnant. If you still have doubts, you can seek help from your medical practitioner.