Sometimes, small blood vessels can get ruptured leaking blood into the nearby tissues. Such flow of blood into the capillaries can cause darkened skin in the affected area. This condition of skin discoloration is known as Ecchymosis. This process can occur largely on your hands and mouth and is not the same as reddish skin caused by bruise. Subcutaneous layer of the skin becomes bluish or reddish due to the sudden blood-flow.

Since there is sudden leakage of blood from the tiny blood vessels it is pushed down into the nearby tissue on the superficial layer of the skin. This can cause discoloration of the skin in varying ranges of color. The affected skin area can range anywhere from 6mm to 1cm in diameter and sometimes even more.

Difference Between A Bruise and Ecchymosis Can Be Explained As Follows :

Bruise occurs due to trauma or injury on the upper layer of the skin due to collision with strong force whereas ecchymosis occurs due to underlying medical condition (rupture of blood vessel and leakage of blood into the tissue). In the first case the operating force is external and in the later it is internal. In both cases pain would be felt but the damage is lesser in ecchymosis than a bruise.

Purpura can be explained as colored patch of skin caused by small amounts of blood leakage into the tissues. Here it affects only small portion of the skin causing patch of darkened skin. In ecchymosis there is larger degree of skin affected than purpura measuring about few mm or cm in diameter.

In both the case there is blood leakage into the skin tissue due to damaged blood vessels. However ecchymosis affects only the mucus membrane and thin skin layer whereas hematoma can affect organs also. In ecchymosis damage is restricted and mild but in hematoma severe damage can happen, warranting medical attention promptly. 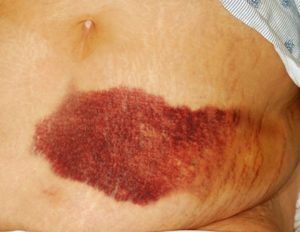 Ecchymosis is not something serious requiring any medical care. It is a symptom signaling the damage of underlying tissue and tiny blood vessel.

Ecchymosis occurs due to rupture of blood vessels thereby allowing blood to the superficial layer of the skin and mucus membrane. Since the blood has no other way to go out it remains there on the skin layer causing skin discoloration (bluish or reddish). Here the trauma is internal that happens to the underlying blood vessel.

1. Crushing Of Soft Tissue – Whenever the body is hit by force or direct trauma it can cause crushing of soft tissue. For instance when you get hit by a baseball or your body collides with a table or you just slipped down the stairs you are injured badly. Here the soft tissue of the affected site can get crushed causing blood vessel rupture and leakage of blood into the tissues or ecchymosis.

Some of the medical issues that leads to ecchymosis are given here :-

2. Leukemia – Leukemia is a condition in which some of the blood cells become malignant (cancer causing). Presence of malignant blood cells can cause sudden rupture of blood vessels causing blood leakage into the capillaries.

3. Renal Failure – Any serious problem in the function of kidneys can interrupt with the expelling of waste particles and other toxic substances from the body. This in turn causes accumulation of waste products in the body. This process can trigger ecchymosis due to increased volumes of waste in the blood. 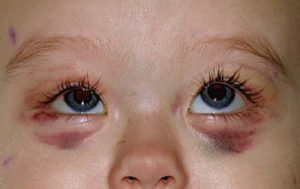 4. Multiple Myeloma – Cancer occurring in the plasma cells is known as multiple myeloma. Plasma cells are nothing but a kind of white blood cells and increased growth of plasma cells can lead to rupture of blood vessels and leakage of blood into the capillaries causing ecchymosis.

5. Liver Disorders – Ecchymosis or blood leakage into the tissues of the skin can occur if the liver function is not normal. Liver is a vital organ that involves in the purification of blood and improper liver function can result in ecchymosis.

6. Fibrosis – Myelofibrosis is a rare kind of cancer that occurs in the bone marrow. This condition can cause quick bruising and easy bleeding since the volume of platelets gets reduced significantly which can lead to blood leakage into the tissues or ecchymosis.

Ecchymosis can be easily detected by mere physical examination of the affected region like hands or legs. Skin discoloration and red patches on the skin can be observed indicating leakage of blood into the tissues. 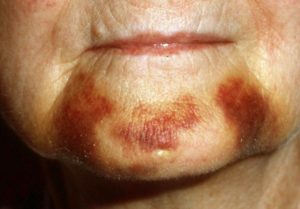 No medical treatment is required for mild to moderate ecchymosis. The condition usually gets resolved within few days. You can seek medical care if the pain is severe interfering with your daily routine. Home remedies can easily bring relief from pain caused by ecchymosis.