Elephantiasis is a parasitic infection spread by the female mosquito. Gross enlargement of organs, more particularly the limbs occur during elephantiasis and the legs would be similar to that of an elephant’s leg. Other areas like hands and genitals can also get enlarged due to this disease. The lymphatic system is spread evenly in the body supported with nodes and blood vessels. The main function of lymphatic system is to drain off any tissue fluid which cannot pass into the bloodstream and filtering the micro-organisms from the fluid. The system would return the blood back into the vein that is carried to the heart for purification.

Sometimes lymphatic node may develop swelling causing lymphadenitis. Obstruction of normal blood flow can lead to considerable collection of lymph in specific areas. Inflammation of lymph nodes would block the normal functions of the lymphatic system resulting in accumulation of fluid in one part. Lower limbs are more prone to inflammation than other nodes leading to accumulation of fluid causing elephantiasis. Lymphatic filariasis is common in certain regions causing elephantiasis for many people. Often elephantiasis occurs due to parasitic infection. Other causes include sexually transmitted diseases, tuberculosis infection and repeated strep infections. Exposure to certain chemicals like silica can also cause elephantiasis.

How The Worms Affect The Lymph Nodes?

The worm after entering the body would settle in a comfortable place of the lymphatic system. It grows several folds and produces large number of worms. They secrete toxic materials causing slow changes in the immune system of the body. At one point the immune system gets weak and becomes incapable of the growth of worms. These toxic substances would cause dysfunction of drainage of fluids resulting in accumulation of fluid. The affected area develops swelling and causing death of tissues and gangrene. Secondary infection can also occur in this area causing further complication.

People living in tropical regions of South America, Central America and Africa and people of South and Southeast Asia are at high risk of elephantiasis. Infected population and poor control of mosquito is the main reason for infection. Walking barefoot in the red clay soil can increase the risk of getting podoconiosis. Minute soft particles of the soil would enter into the body through the feet causing podoconiosis. Cancer patients for whom large number of lymph nodes are removed are susceptible to elephantiasis.

It may take several years for the first symptom to appear in people infected with elephantiasis. Till that time larva mixes with blood passing through the feces and saliva which again is transmitted to others through mosquito. This disease would cause enlargement of lymph nodes of the legs. The affected area becomes hard and thick and even the skin gets hardened. Due to gross accumulation of fluid inside the area becomes enlarged multiplying several times of normal size. The leg would resemble an elephant leg in affected people and hence the name elephantiasis. The outer layer of the skin would develop ulcers taking pebbly appearance and the skin color gets dark.

Some other symptoms of elephantiasis include fever, fatigue and chills and malaise. Often the legs and lower portion of the knee are targeted by this disease. In rare cases it can affect the external genitals. In men it can cause enlargement of scrotum and retraction of penis under the skin. It can cause considerable pain and burning sensation. In female the vulva gets enlarged due to fluid accumulation. A big mass would cover up the skin between the thighs due to enlargement of lymph nodes. In very rare cases breasts can also get enlarged. There will not be any symptoms in the initial stages except mild pain and tenderness in the affected leg. In some people it may cause thin red streaks or lining on the skin indicating inflammation of blood vessel inside. 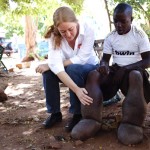 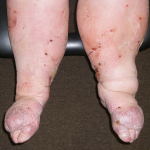 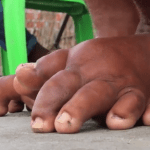 This is the first stage of lymphedema causing progressive swelling of limb along with pain or discomfort. You may find it difficult to fit the regular clothing on the affected leg. The symptoms are high during the day and gets better during night. Keeping the legs in elevated position can bring relief. Swelling appears to be reduced by morning.

This is the second stage wherein the skin hardens. The swelling will not get reduced by morning and it progresses gradually.

Now the condition becomes irreversible. Permanent skin changes would happen and it may not be possible to grasp the skin with fingers at this stage.

The doctor would first complete the physical examination. Lymphatic filariasis can be diagnosed by blood count tests which contains increase of eosinophils. In addition PCR tests, ELISA test (to detect antibodies) and blood cytology is done to detect microfilaria.

Not a single approach is enough to treat elephantiasis. Combination of medications, therapy and surgery is the right way for managing the symptoms. Medications like diethylcarbamazine are prescribed for destroying the entire group of microfiliariae.  Doxycycline can be effective in arresting further accumulation of fluids. Albendazole and similar antihelminitic drugs are given. Anti-parasitic drugs like Ivermectin are prescribed with albendazole. Secondary infection from bacteria can be treated with suitable dosage of antibiotics. Surgery is done for removing the lymphatic tissue from the leg followed with radiation therapy. For people affected with sexual organs reconstructive surgery is to be done.

People living in endemic regions can take a shot of DEC for each year. Mosquitoes should be destroyed using suitable insecticides and sprays so that transmission does not occur.