Elephantiasis is an infection caused by filaria that causes abnormal enlarged limbs or other area of the body. This micro-organism causes obstruction in the free flow of lymphatic system resulting in accumulation of fluid (causing enlarged limb). In some people external genitals also get enlarged. Since the enlarged limb looks like the leg of an elephant, the term “elephantiasis” is used. Lymph is the fluid that flows in the lymphatic system and when the normal flow is blocked it leads to fluid accumulation in the body. Elephantiasis is caused by 3 kinds of worms and sometimes due to sexually transmitted diseases of bacterial infection. This disease can be managed by suitable medications and in many cases by combined approach of surgical procedure.

How Lymphatic System Gets Blocked ?

Lymphatic system operates as immune system in the body thus preventing the body against many infectious diseases. Lymph vessels are arranged in the form of network through which water like fluid called lymph flows. This fluid runs throughout the body and drains the nutrients in the bloodstream. When the lymph vessels are blocked by overgrowth of micro-organism it can stop the regular flow of lymph resulting in fluid accumulation. This can lead to massive swelling of organs involved.

Signs and Symptoms of Elephantiasis :

This disease causes abnormal enlargement of limbs and other parts of the body. Often the legs or arms are affected. Swelling of leg occurs multifold and can cause social stigma. The swollen leg resembles the leg of an elephant.

The skin becomes very dry and thick giving pebbly appearance. Normal color of the skin changes in the infected area resulting in dark skin due to hyperkeratosis. Other symptoms of elephantiasis include fever, chills, and general discomfort. It can also cause burning pain in the limb. For some people the external genitals become enlarged. Both men and women are infected by this disease.

For males the scrotum gets enlarged and penis would get retracted beneath the skin. This can cause intense pain and warmth along with burning sensation. For females, vulva (genital part) gets thick and enlarged. A big tumor like mass would appear between the thighs causing intense pain while walking. For some women breasts can also become enlarged and over-sized. In addition to the above, if elephantiasis is not treated it can lead to secondary infection in any organs causing more complications. 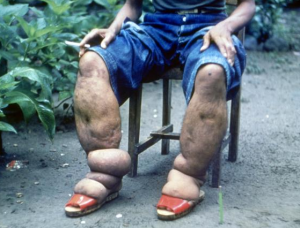 Any block in the free-flow of the lymph through the lymphatic vessels causes elephantiasis. Lymphatic system is distributed throughout the body and obstruction is caused by parasites called filariasis. Primarily elephantiasis is caused by 3 worms by name Brugia timri, Brugia malayi and Wuchereria bancrofti. These worms enter into the body and grow in the lymphatic system multiplying in number ultimately leading to blockage of lymph (liquid).

The worms or parasites are generally carried by mosquitoes and when they bite it transfers the parasites (in larval stage) into the bloodstream.

Elephantiasis causing enlargement of genitals can be caused by bacteria called lymphogranuloma venereum which can be transmitted through sexual intercourse. Another bacterium called Chlamydia trachomatis can also cause obstruction of lymphatic system leading to swelling of genitals. In rare cases elephantiasis can also be caused by podoconiosis disorder. This occurs to people walking barefoot in the soil/garden wherein some minerals present in the soil can trigger immune system by mistake causing inflammation in the lymph vessels of legs and feet.

For some people it can be caused by leishmaniasis, a protozoan. Elephantiasis can develop after surgery or radiation therapy also wherein the removal of lymph nodes can lead to accumulation of lymph fluid resulting in swelling of organs. Research is going on to identify the complete gene structure of Brugia Malayi worm that causes this disease. 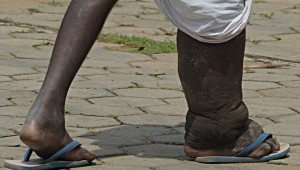 Who Are Largely Affected ?

People living in tropical regions like India, Africa, Southeast Asia and Southern America can develop elephantiasis. It can occur to any person irrespective of age and gender.

The doctor would observe swelling of organs like limbs or hands with obvious enlargement. He would collect the complete medical history of the patient and order for collection of tissue sample from the enlarged limb to test it in the lab. Number of tests is done in the laboratory to confirm the diagnosis of lymph damage.

Based on the test results the doctor would start the treatment for underlying condition of lymph damage.

Diethylcarbamazine is prescribed for filarisis associated lymphatic damage. For LGV doxycycline can be given. Powerful antibiotics like azithromycin are given for donovanosis.

Even after completing the course of medication, the health of the patient will be regularly monitored for at least one year or more to observe any changes. Any signs of parasitic infections are checked and treated regularly.