Endometriosis is the excessive growth of endometrial cells (that forms the inner lining of the uterus) but they grow outside the uterus which can cause pelvic pain during menstruation. It occurs more commonly in women who have infertility problems than in others. Most of the women with endometriosis will not have any symptoms except a dull pain. Pain killers and other way of treatment are available for endometriosis.

During normal course of menstrual cycle, endometrial cells join together to form a protective lining on the uterus to enclose the fertilized embryo. When the egg is not fertilized there is no use of retaining the inner lining of endometrial cells and hence they are shed during monthly menstruation cycle. But during endometriosis these cells will attach to the tissue located outside the uterus. Often they are found in the fallopian tubes or in the ovaries and are described as endometriosis implants. These implants are harmless and do not cause cancer.

For some women there will not be any symptoms at all. For others endometriosis can cause pelvic pain during periods. The range of pain may differ from dull to severe. Pelvic pain will usually begin before your menstrual cycle starts and continue till you have bleeding. It can cause pain in the lower abdomen, your back and thighs. This dull pain will automatically vanish after menstruation.

For many women with endometriosis there will be pain when they have sex. In addition there can be signs like fatigue, headache, bloating sensation and constipation during menstrual cycle. The same symptoms are felt by women who have inflammatory disease in their pelvic region or more serious problem like irritable bowel syndrome. In rare cases, endometriosis will make deeper implants in areas flooded with nerves thus aggravating the pain. The presence of endometrial tissue can cause infertility problems in women. 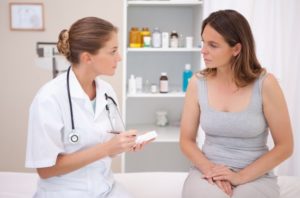 Whether Endometriosis Can Cause Cancer?

It is true that women with developing tissues of endometrial cells have increased risk of having epithelial ovarian cancer. The risk squarely increases if a woman is found to be infertile due to endometriosis tissue development. You can reduce the risk of getting cancer by using oral contraceptive pills which can be effective for endometriosis.

The major complication of endometriosis is infertility. Women with endometriosis are often infertile and have difficulty in becoming pregnant. The presence of endometrial tissues can obstruct the path when the egg starts traveling towards the sperm for fertilization. Hence endometriosis can delay the pregnancy very much. It is better to get pregnant even if you are diagnosed with endometriosis since unnecessary delay can worsen the chance of pregnancy.

Your doctor will look for symptoms and check the exact location where pain occurs in your body. She may order for pelvic exam for ruling out any abnormalities in pelvic region and also to detect any scars in the uterus. Ultrasound scanning is done using high frequency sound waves that produce images which are captured in a instrument. By this method clear view of the uterus can be taken. Laparoscopy will be done by making tiny incision on the lower abdomen to collect tissue samples and testing it in the laboratory for detecting any cancerous cells.

Treatment depends on your health condition, symptoms and its symptoms. Medications and surgical approach are effective in treating endometriosis. To get relief from pain your doctor may prescribe non steroidal anti-inflammatory drugs like Advil, Motrin IB or naproxen. Over the counter medications are also helpful in managing pain. Hormone injections are given for getting relief from pain caused by endometriosis. By taking hormone injection endometrial tissue will not develop and get implanted on the fallopian tubes.

Surgical invasion is the best solution for women who are planning to get pregnant sooner. Your surgeon will remove the endometrial tissue thus making the uterus and ovaries intact for pregnancy. It will also give relief from the pain caused by endometriosis. Laparoscopy surgery is effective in removing endometriosis. Some women would undergo in vitro fertilization procedure IVF to get pregnant fast. In rare cases hysterectomy is done to remove the infected uterus and ovaries together. But the affected women can never become pregnant after hysterectomy. For managing mild pain you can have heat therapy and take warm baths to relax the pelvic muscles.