When the intraocular cavities get inflamed for some reason, this condition is known as endophthalmitis. It can be either non-infectious one caused by retained native lens substance or panophthalmitis infection wherein the entire coats of the eye develop swelling.

Normally, there is a blood ocular barrier which protects the inner organs from invading organisms. But during endogenous endophthalmitis, the organisms penetrate the barrier by direct invasion and by causing changes in vascular endothelium. They in turn destroy the intraocular tissues thus causing infection to inner organs. Sometimes, surgical procedure may become the reason for exogenous endophthalmitis.

Endophthalmitis caused by bacteria cause pain, redness of eyes and swelling of eyelids. Fungal endophthalmitis may generally persist on the ocular cavities for weeks together causing blurred vision and pain.

Virus and bacteria are responsible for causing endophthalmitis infection. In case of individuals who have endogenous endophthalmitis, they will have symptoms that predispose them causing infection. They would suffer from diabetics, kidney problem, cardiac failure, Lupus, Aids, leukemia, gastrointestinal problem,
lymphoma and other disorders.

Sometimes, invasive procedure like hem-dialysis, catheterization, endoscopy, chemotherapy and dental procedures may also cause endophthalmitis. When a person undergo surgery on any other part or he has problems in his heart valves, or he suffers from immune disorders he can get endophthalmitis.

Almost half of endophthalmitis infection is caused by fungus Candida albicans. Streptococcal infection may occur from Group A streptocci and Streptococcus pneumonia. Rarely gram negative and gram positive bacteria can also cause infection.

In case of exogenous infection, the organisms lie inside the eyelids or conjunctiva after surgical process. Very often this type of infection occurs only after injury. 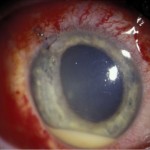 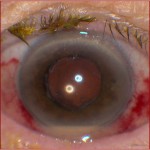 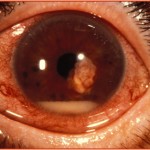 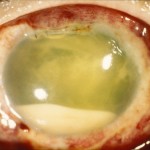 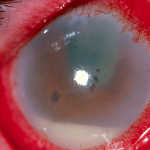 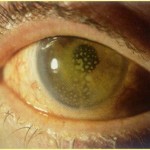 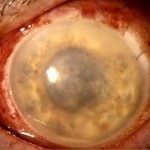 Doctors used to diagnose endophthalmitis using Gram stain culture of the vitreous collected from the eyes. Complete blood count is also done to rule out other possibilities of infection.

The mode of treatment method may vary according to the condition of the patient and intensity of infection. Topical antibiotics are given and if necessary Intravenous steroids are started. The method may slightly vary with respect to traumatic endophthalmitis and exogenous bacterial infection. Very often, the patient has to be hospitalized for giving extra care and attention from ophthalmologist.

Antibiotics like Gentamicin, Vancomycin, Ceftazidime and Cefotaxime are given according to the level of infection.