Fingers offer wide range of movements in daily life and it is difficult to imagine life without proper functioning of fingers. Hand is made of many bones, ligaments, tendons and muscles which helps in making flexible movements including writing, holding and lifting any object. The wrist is the meeting point of two main bones of forearm. One is the large sized bone located on the thumb side called radius and the other is small sized bone found on the opposite side called ulna. These two bones would meet the corpus at the point of wrist. Wrist is composed of many joints and ligaments wherein several bones of the hand and arm meet.

Finger joint is covered with cartilage layer which makes it possible for gliding smoothly during movement. These joints are made of fibrous capsule lined with synovium (a thin membrane) which secretes synovial fluid for giving lubrication to the joints. Whenever there is loss of fluid the joints develop swelling causing finger pain. Finger joint pain can cause symptoms like tenderness and stiffness, limited movements of finger and swelling of joints with intense pain. Various medical conditions like arthritis, osteoporosis, gout and lupus can affect the finger joint. Finger joints can be damaged by injury, trauma and nerve damage caused by prolonged diabetes. Finger joint pain can be diagnosed with suitable imaging tests. Treatment of finger joint includes medications, therapy, wearing of splints and strengthening exercises.

Any form of arthritis can cause significant damage to fingers causing pain and stiffness of joints. Pain while moving fingers and stiffness are the first symptoms of finger joint inflammation. It causes intense pain while making certain movements with fingers. The symptoms will not be persistent and increases when doing certain activities. Some of the common signs of finger joint pain include tenderness of joints, stiffness, restricted movement, crackling sound in the joints and weakness. There can be considerable loss of muscle mass leading to muscle wasting due to osteoarthritis. Arthritis can attack any joint of the body but parts like knee joint, hip joint and finger joints are the most common. Some people may feel the pain in one finger but for others it can be felt on all the fingers. 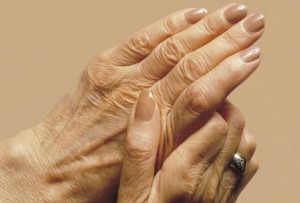 Arthritis or inflammation of joints is one of the root causes of finger joint pain. Arthritis can occur in many forms like rheumatoid arthritis, osteoarthritis and much more. Severe form of arthritis can cause more damage to the muscles, joints and finger bones and even they can damage the blood vessels and tissues inside. Finger joint pain can also be caused by many medical conditions like diabetes (prolonged) that can damage the nerve resulting in tingling or numbness of fingers. This condition is called as peripheral neuropathy.

Injury or trauma can also damage the finger joint which can commonly occur during accidents. Carpel tunnel syndrome can damage the finger joint causing intense pain. In addition to the pain, some of the medical conditions may cause tingling sensation, numbness and painful ulcers on the fingers. Gout is a type of arthritis that develops due to excess secretion of uric acid and deposition on finger joints. It can cause excruciating pain with swelling.

Certain types of skin infection like lupus can also induce finger pain. It is an autoimmune disorder in which body’s own immunity would produce antibodies to attack healthy joints and tissues. The blood vessels of the hands or legs get narrowed due to heightened stress or very cold temperature. In such condition the fingers would become pale and white and painful. This is known as Raynaud’s phenomenon. Osteoporosis is another condition in which the bones lose its density leading to fracture. This is common with aging process. Sometimes the connective tissue gets hardened due to abnormal growth of hard skin affecting the soft skin covering the fingers. This can reduce the normal mobility of fingers and this condition is known as scleroderma. Other conditions like Dupuytren’s contracture and trigger finger can also induce finger joint pain.

It is easy to identify finger joint pain based on symptoms. Your doctor would assess the symptoms after physical examination checking for tenderness and inflammation of the finger joint. He may request for X-ray to identify bone spur or mild fracture. If required, CAT scan or Magnetic Resonance Imaging test, bone scan or other relevant tests would be done. 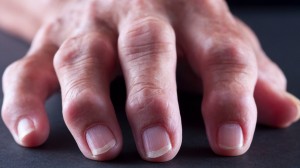 Treatment is based on the symptoms and severity of joint damage. Mild form of finger joint pain can be managed by conservative measures like hot and cold therapy. Cold ice packs can be applied on the painful finger to reduce swelling. Similarly heat therapy can provide relief from pain. Splinters or braces can be used for treating the finger joint affected with arthritis. Fractured finger can be kept immobilized using splints. This device can be useful for treating Carpal tunnel syndrome that causing tingling and numbness of fingers. In addition, several other devices are useful for managing stiffness of finger joints.

NSAID’s are highly effective in treating the symptoms of many types of arthritis. Corticosteroids like cortisone would be injected directly on the affected joint of the finger to give quick relief from pain in severe cases. Analgesics are recommended to treat arthritis which can give relief from pain, swelling and rigidness of finger joints. Anti rheumatic drugs can be used to control inflammation but they work slowly. Based on the underlying medical condition your doctor would prescribe suitable medications.

Surgery will be considered only for severe cases wherein symptoms are uncontrollable and it arrests the normal function of fingers. Wrist fusion, wrist replacement and finger joint fusion are some of the surgeries done for finger joint pain. In wrist fusion, the surgeon would gently remove the joints that are badly damaged by arthritis and replace them with plates. Fusion can be either partial or complete based on the condition.

Wrist replacement can be done by making small incision on the wrist to remove the damaged joints and some of the bones which would be replaced with metal prosthesis along with carpal component. For patients affected with Carpal tunnel syndrome, the surgeon would release the carpal ligament from the nerve. Nowadays this can be done with minimal invasive method.