The chest is one of the most important parts of the body. It provides housing for two of the body’s most vital organs – the lungs and the heart. It also houses portions of the oesophagus, the tube through which food we eat passes through from the mouth into the stomach.

In consequence, symptoms in the chest may require urgent attention; they could be the only clues to life-threatening diseases of the heart and lungs. They could also be indications of digestive problems.

Some symptoms result from conditions which are not serious and may go way on their own. Gas pain in the chest is one of less serious afflictions in the chest and most often results from problems of the digestive system – gut, stomach, intestines.

Symptoms Of Gas Pain in Chest

The primary symptom is pain which may be accompanied by the following: 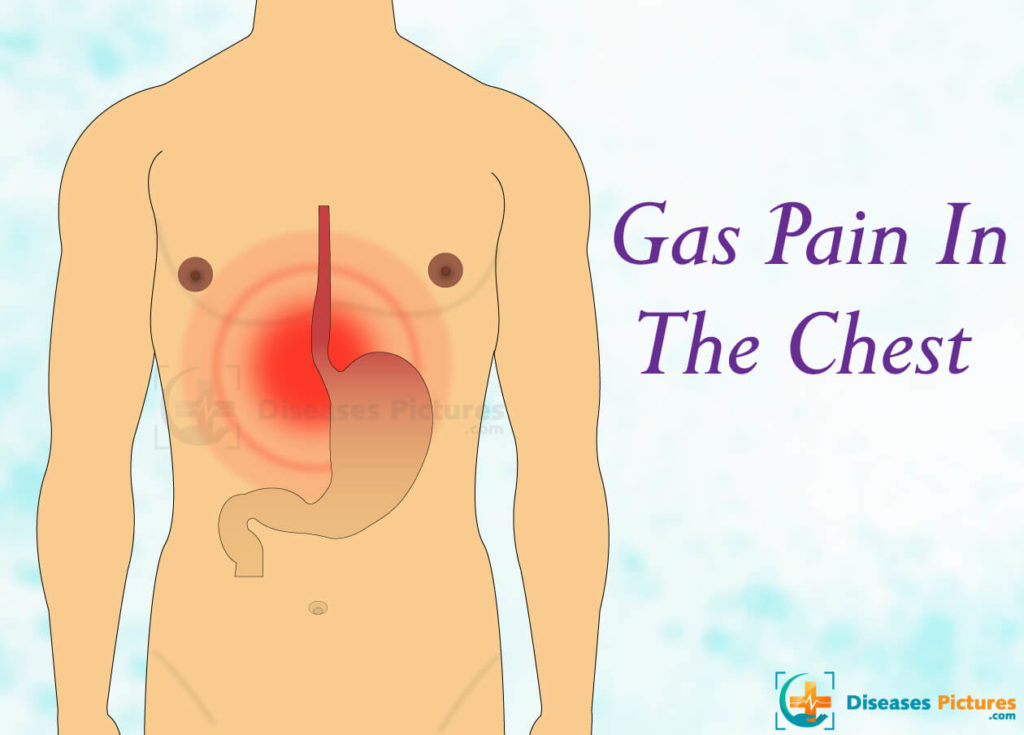 Causes Of Gas Pain in The Chest

Undigested food in the intestine gets fermented by bacteria and other organisms and subsequently ends in the release of gas. Gas may travel along the digestive tract and into the oesophagus that causes chest pain.

Bad eating habits may lead to excess gas in the stomach and intestines. Talking while eating or eating hastily, results in excess swallowing of air which in turn results in gas and gas pain.

Eating milk products can lead to increased gas production and associated pain in some people. This is common in people of African descent. With such people, the main carbohydrate in milk called lactose is difficult to digest.

As with lactose intolerance, some individuals react to certain foods including those containing protein like gluten. These foods may be difficult to digest and may undergo changes as they move through the different parts of the digestive system.

Undigested food, as previously explained, often undergo fermentation and other changes which may facilitate increased gas production. The symptoms associated with food sensitivity may persist for several months before it resolves.

Gas may also result from the body’s reaction to food that is contaminated. Certain foods may contain disease-causing organisms like bacteria, or harmful substances which may irritate the digestive system and interrupt normal digestion. Anything which causes indigestion sets the stage for fermentation and often leads to excess gas production.

Constipation is a common condition that is, once in a while, experienced by many. It commonly refers to the difficulty in passing stool as frequently as a normal person should.

It is caused by absorption of too much water by the large intestines from the remains of digestion that come out as stool. This process results in dried-up and hard stool. Clinicians may classify a condition as constipation, if the frequency of passing stool is less than three times in a week.

Straining when passing stool, lumpy, painful hard stool and sometimes abdominal pain are common symptoms of constipation. This condition may prevent flatulence and keep gas trapped within the digestive system. Gas may travel to the oesophagus and lead to pain in the chest.

Diseases Of The Intestine

Several conditions can cause chest pain, therefore it is strongly recommended to go for tests for accurate diagnosis as doctor’s physical examination is not enough although the exact cause of the symptom may be deduced from patients’ descriptions of how they feel.

A doctor may commonly request these tests:

Once heart problems are ruled out, he may suggest other tests to assess the reasons for chest pain.

Gas may resolve on its own after belching or bouts of flatulence. Life style changes including those outlined as preventive measures often help with relief.

If pain becomes unbearable or persists, certain drugs may be prescribed and these may include bismuth subsalicylate for indigestion, activated charcoal in case of perceived food poisoning, antibiotics for infection, pain killers and supplements to help break down certain foods which are difficult to digest.

Can Gas Give You Symptoms Of A Heart Attack?

Yes. Severe gas pain in the chest can present like a heart attack. Mild and serious causes of pain in the chest are often difficult to distinguish. If you have strange symptoms, you should report immediately to your doctor.

Can Gastric Problems Cause Chest Pain?

Yes. Some gastric problems, like acid reflux and gas can cause pain in the chest. However, most of these problems may resolve on their own. If you have chest pain which is persistent and severe, you should report immediately to your doctor.