Gastritis is the general term given for inflammation in the stomach. It can occur due to bacterium or injury or many other factors. The soft inner lining (gastric mucosa) of the stomach is inflamed. Gastritis is of two types namely, acute (occurring suddenly) and chronic (long term). Acute gastritis can be erosive or non-erosive type causing damage of mucosal cells. The intensity of chronic gastritis is found by the appearance of inner lining of the stomach.

Gastritis can cause feeling of fullness or bloated sensation in your stomach after eating. It can cause burning ache or moderate pain in the upper abdomen which may worsen after eating food. In some cases it causes nausea and vomiting, diarrhea.

Most of the time gastritis will not show any symptom. But the affected person may always feel “full” and bloated with lots of burping and belching. The symptoms are not seen daily but they come and go. If your stool is of different color (black) and you have some of the above symptoms you can fix up appointment with your doctor.

Infection is the major cause of gastritis. Helicobacter pylori are the bacteria that affect the delicate lining of the stomach causing infection. It would first infect the gastric mucosa (lining) and further proceed to other areas of the stomach. It may remain there for years being both dormant and active. Prolonged usage of Non steroidal Anti-inflammatory drugs (NSAIDS) can also develop infection. Certain drugs like cocaine and continuous consumption of alcohol can damage the mucosa of the stomach.

Stressful events, allergic reactions and radiation therapy can also cause infection of the stomach. Severe type of food poisoning can damage cells of the intestine leading to infection. There is a thick protective layer which serves as a barrier from the enzymes and acids discharged during digestion of food. Sometimes, this barrier gets affected allowing the digestive juices to enter the lining causing inflammation.

Individuals who are once infected with Helicobacter pylori would experience symptoms of chronic gastritis. Some other risk factors include old age, overuse of corticosteroids and pain relievers and alcohol consumption can cause inflammation of the stomach lining. Stress undergone during major surgery or severe injury/trauma to the stomach can cause gastritis suddenly.

Bile reflux disease is caused by the action of bile (an enzyme) which travels through small intestine affecting the layers of stomach. Pyloric valve normally prevents the entry of bile into the stomach but sometimes it may not work properly thus causing the discharge of bile into the stomach. People with autoimmune diseases like HIV, cancer and Crohn’s disease are prone to chronic gastritis.

The medical history of the affected person is collected by the doctor before treating gastritis. The doctor would ask a series of questions about the list of medications you are taking and about alcohol consumption. He would collect small tissue sample of the stomach by biopsy for testing the presence of H. pylori. Further blood culture, urine and stool analysis of the person is done for detecting any changes. X-ray and barium enema test is conducted for getting clear picture of the abdomen. Stomach endoscopy is done by passing thin tubing through the throat into the stomach and till the intestine. The doctor would then look for symptoms of inflammation and finally collects sample tissue for testing.

Medications are given either for blocking the acid production or for destroying the bacteria. Antibiotics like Biaxin, Flagyl, Amoxicilin, clarithromycin, and tetracycline are prescribed for destroying H. pylori. Follow the instructions of your doctor for completing the course of antibiotics.

Drugs like Omeprazole, lansoprazole and rabeprazole are effective in blocking the acid production. They are proton pump inhibitors in treating acute and chronic gastritis. However long term use of these drugs can cause damage to your hip bone and hence consult your doctor before taking this medication. Antacids helps in neutralizing the acid produced in the stomach and also gives relief from pain. 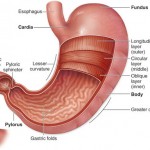 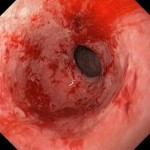 Take small amount of meals frequently instead of eating large quantities of food. It helps in easy digestion and absorption. Avoid taking spicy and hot foods and fried items that can cause irritation to the soft lining. Restrict the amount of alcohol you consume. In case you are using pain relievers consider stopping it or try using alternate drugs. H. pylori can be transmitted through food or water. Hence wash the hands thoroughly before eating and always take fully cooked foods. Follow healthy habits in eating and drinking.