Normally the tongue has an extra layer of covering with fine hair like structures called papillae. But people with geographic tongue will not have these papillae thus exposing the patches on the tongue. These patches will sometime look like small islands with clear defined border resembling a country’s map. For this reason it is called as geographical tongue. In medical terms it is called as erythema migrans or migratory glossitis.

These irregular patches on the tongue will not remain on the same place. It would heal within weeks just to reappear on the other surface of the tongue. Hence for this reason they are called migratory glossitis. As such geographic tongue do not possess any problem and are benign (harmless) in nature.

Geographic tongue is not the same for all people since the symptoms differ from one person to the other. The size and shape of the patches vary widely. For some people it would appear on one corner of the tongue which would disappear to re-appear on the other area. The map like appearance on the tongue will have defined border which is white in color. It would create red patches on the tongue with defined borders.

The map like shape on the tongue will disappear within days or weeks for some people but for others it would not go even for months or years. For some people it would cause mild pain and discomfort while eating hot and spicy foods. Smoking can aggravate the pain if an individual is having geographic tongue. It affects about 1-3% of people and it develops on elderly people often. Geographic tongue is harmless and does not require any treatment and in case of any pain it can be managed by over the counter pain killers.

Geographic tongue can be easily diagnosed by simple examination of the tongue. Your dentist/doctor will use a small lighted torch to illuminate your oral cavity and identify small patches on the tongue. He would ask you to move the tongue in sideways to assess for more number of patches. 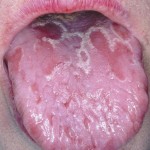 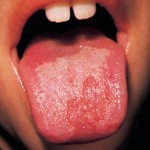 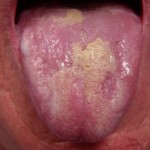 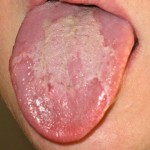 As such geographical tongue needs no treatment if the person has no discomfort. The symptoms will often subside within few weeks but for some it may appear on other surface of the tongue. To get relief from pain/discomfort you can take over the counter pain killers. Your dentist would recommend an anesthetic mouth wash to prevent any infection on the tongue. In case of any inflammation antihistamines can be taken.

In severe cases topical creams that contain corticosteroid is prescribed. You can manage the discomfort by avoiding hot and spicy foods if you have geographic tongue. Quit smoking or taking tobacco in any form. Do not change your toothpaste often and avoid toothpaste with heavy flavor since it may worsen the problem.