Gingivitis is a kind of dental problem that causes swelling, irritation and redness in the gums. Very often, gingivitis is mild and hence the person may not be aware of the symptoms. If gingivitis is not treated promptly, it can lead to more serious periodontal disease and even loss of tooth. Poor dental habits are the main reason for gingivitis. Gingivitis is caused by infection of bacteria and can be treated with antibiotics. Inflammation of gums can easily be prevented by maintaining proper oral hygiene. Gingivitis is believed to the major cause of tooth loss as per the report given by the American Dental Association.

If a person develops gingivitis, the gums would become reddish brown in contrast with normal pale pink color. The gums may start bleeding as you brush your teeth and the gums become swollen and receding. For some people the gums become soft and tender to touch. It may cause foul smell due to growth of bacteria. In more severe cases, the gums would pull away from the pulp. You can feel reduction in the grip of affected teeth when you bite something. Gingivitis can cause pain when you chew something hard and it can produce pus like fluid. Sometimes the teeth becomes loose and dentures that were fitting originally would not fit in place. The characteristic feature of gingivitis is change in gums color to dusky red or brown.

Poor dental habit is the main cause for gingivitis. Once you are not cleaning the leftover food particles from the teeth it starts accumulating forming a layer on which bacteria would grow causing plaque like sticky film. Brushing after each meal can remove plaque and bacteria totally. If you are not brushing daily plaque layer becomes thick and hard and grow into tartar under the gums. For some people who brush properly can also get plaque if their saliva contains lots of mineral content. Once tartar is formed you cannot remove it by normal brushing and only a dentist has to clean and remove it. If gingivitis is left untreated for long duration, it may damage the soft tissue lining of the gums which in turn can loosen your teeth. 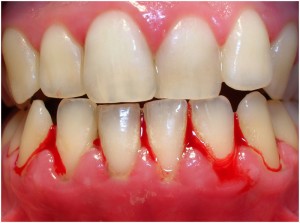 Gingivitis is a common dental problem and anyone can develop it. Some factors like poor dental hygiene, using tobacco in any form and old age can increase the risk of gingivitis. In addition, using certain strong medications, disorders like diabetes, fungal or viral infections and decrease in immunity can lead to gingivitis. Lack of proper nutritious diet and hormonal changes and wearing improperly fitting (too loose or tight) dentures can also cause swelling of gums and gingivitis. If left untreated gingivitis can cause periodontis and tooth decay.

Dentist can easily identify gingivitis on physical examination of your oral cavity. He would look for plaque like layer on the teeth and other symptoms like redness and easy bleeding of gums. He might also check the gap between the teeth which would widen if you have gingivitis. 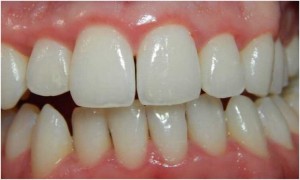 How To Prevent Gingivitis?