Thyroid gland is found below the neck located just below the Adam’s apple. Goiter is the condition in which the thyroid gland grows bigger than normal size. Though it may not cause any pain still it makes you difficult to breathe and eat. Lack of iodine is the main cause for getting goiter. Goiter can be treated and managed either through medications or by surgery. But the method of treatment depends on the size of the goiter and age of the patient.

There are some goiters that may not cause any symptoms. Some of the common symptoms are coughing, tight feeling on the throat and difficulty in swallowing. There would be large swelling at the base of the neck making it visible for all. Goiter can cause hoarseness in your voice and difficulty in breathing.

Grave’s disease can attack the thyroid gland by mistake making it to produce excess of hormone leading to goiter. It would also cause inflammation of thyroid gland. Similarly goiter can also develop due to hypothyroidism (less production of thyroid) caused by Hashimoto’s disease.

This is an autoimmune disorder attacking the thyroid gland which produces very low levels of thyroxin. This in turn triggers the pituitary gland to secrete more of TSH which causes goiter. In rare cases, pregnancy hormone called Human Chorionic Gonadotropin can cause enlargement of thyroid gland leading to goiter. Inflammation on the thyroid gland can cause swelling and goiter.

Goiter predominantly occurs on people who consume less iodine. Women are more prone to get goiter due to thyroid disorders. Individuals who are aged, having autoimmune disorders, women who are in menopause stage can get goiter. Effect of certain medications taken for suppressing the immune system can cause goiter. Goiter as such will not create any complication. But large sized goiters can make breathing difficult and create repeated cough.

It is easy to detect goiter by the enlarged thyroid gland present below the neck. Your doctor can order for hormone test for checking the level of thyroid stimulating hormone and ultrasonography test.

Treatment of goiter depends on many factors like age of the person, his health condition, the size of goiter and the intensity of symptoms. For small sized goiter no treatment is necessary. Medications like levothyroxine are given for treating hypothyroidism which would eventually reduce the secretion of TSH from the pituitary gland. For reducing swelling, you can take aspirin after consulting your doctor.

Surgery is done for removing part of thyroid gland or in full and this process is called thyroidectomy. People having large goiter and nodular goiter can opt for surgery. But after surgery the person should take levothyroxine to regulate the levels of thyroid hormone. For some people, doctors use radioactive iodine for suppressing the overactive thyroid gland. It destroys the excess of thyroid cells thus reducing the size of goiter. 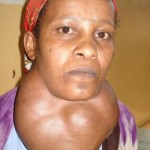 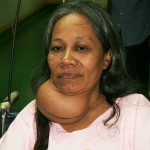 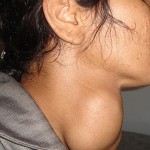 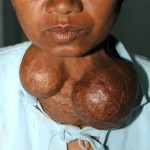 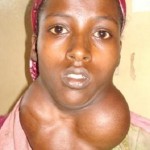 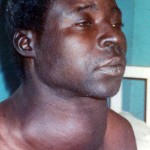 For people who have developed goiter due to lack of iodine, taking enough of iodine in daily diet will help. Increase seafood like shrimp or shellfish in your diet. Cow’s milk and yogurt are rich source of iodine and make sure you take 150 micrograms of iodine daily.