People are likely to get infection when they come into contact with body fluids like pus, white discharge and secretions from vagina from infected person. This fluid will then mix with the person’s fluid like seminal or vaginal fluid and mucous membranes causing gonorrhea. The symptoms of oral gonorrhea are sore throat, difficulty in swallowing food, strep throat, white spots and redness on throat. Some people will also have fluid like white discharge from their mouth with foul smell.

Both men and women can get gonorrhea on mouth and will share the same symptoms. It starts usually with kissing activity since bacteria will be present on mouth cavity or even tongue. Bacteria will also enter your body when it is present in the pharynx and your sexual partner piuts his/her fingers, genitals or anus inside. Doctor will examine the condition of the throat and will do throat swab test for detecting the presence of N. gonorrhoeae( Neisseria gonorrhoeae ).

What Is Gonorrhea In Mouth?

Gonorrhea is the name of the bacterium that spreads through sexual intercourse with the infected person. It is one of the most common STD affecting millions of people each year. Gonorrhea often affects your mouth, throat and genitals. Gonorrhea may not cause any symptoms in many people and they are unaware of being infected. It can cause serious side effects in pregnant women by affecting the eyes of the fetus even before birth.

Mouth gonorrhea or oral gonorrhea is caused by gram negative bacterium which spreads by oral sex. By exchange of saliva from infected partner one can easily get mouth gonorrhea. Neisseria gonorrhoeae is the name of the bacterium that causes gonorrhea. The yellowish fluid discharge also called as exudates can mix up easily with the mucus membrane of the mouth spreading the infection.

In most of the cases, oral gonorrhea may not show any symptoms. It may cause slight discomfort while eating and sore throat which is similar to many other problems. Symptoms, if at all they develop can show up anywhere from 7-21 days after getting infected. In severe cases, it can cause redness in the oral cavity, inflammation and red spots on the tongue. The above signs are similar to that of strep throat. The soft mucus lining of the mouth gets disturbed due to the growth of bacteria leading to inflammation and scarring.

Causes Of Gonorrhea In Mouth :

N Gonorrhoeae is the bacterium that causes mouth gonorrhea. Having frequent oral sex is the main reason for oral gonorrhea.

How The Bacteria Get Transmitted?

As many people believe, gonorrhea cannot spread by kissing the infected person. Bacteria are likely to get transmitted by sharing sex toys of infected partner or by touching the discharge fluid directly with fingers or penis and by accidentally touching the body areas like rectum or genitals or eyes. Direct oral transfer of bacteria occurs in rare instance and around 90% of people would not develop any symptoms. 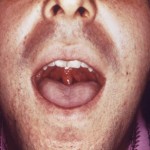 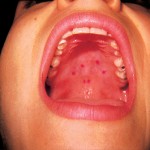 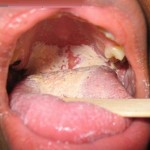 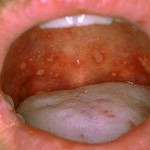 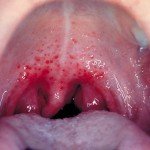 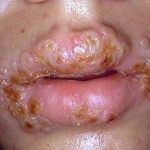 Your doctor may order for simple test like urine culture or gram stain test to diagnose oral gonorrhea. A swab will be sent into your cervix (women) or urethra (for men) to collect small tissue sample which will be then tested in the lab by placing it on culture plate. Culture test can take 3-4 days for getting results but is reliable when compared with other tests.

Since gonorrhea is caused by bacteria, antibiotics are effective in treating it. Ceftriaxone is given in the form of oral pills or as injection. Often combination of drugs like ceftriaxone and azithromycin is recommended. It is difficult to treat complicated gonorrhea that has spread to other parts of the body. Otherwise oral gonorrhea can be managed with antibiotics of suitable dosage. Doxycycline like Oracea or monodox can be prescribed along with ceftriaxone. Pills like Factive are given in combination with azithromycin for quick recovery from symptoms.

Your partner (s) should go for testing and further take prescribed antibiotics even they do not show any signs. In many cases the same set of drugs are given for partners. Remember you can get infection again if your partner is not taking treatment.

If newborns are infected with gonorrhea showing signs of inflammation of eyes antibiotic eye-drops are given to prevent further infection. Their eyes will be examined and suitable precautions will be taken.

Oral gonorrhea or gonorrhea affecting any part of the body can be prevented by taking little extra care in sex.

Kids who are new to sex should understand that there is no such thing as “safe sex” even with oral penetration. They are so excited and ignore all the precautionary measures. If you have any doubt regarding the oral gonorrhea, please ask for help from any center and go for regular screening. The worst part of this infectious disease is it makes your body prone for many kinds of sexually transmitted diseases in future.