Heart attack has become a common term nowadays. Heart attack is one of the major causes of death worldwide. It is true that thousands of people die due to heart attack each year. Unlike popularly believe, heart attack will not stop the functioning of heart but it only damages and weakens the heart muscle. Most of the cases die within few minutes if prompt medical care is not given.

Your heart is about the size of your fist and includes 4 chambers of which two are auricles and two are ventricles. Various valves are connected with these chambers for helping to and fro movement of oxygenated blood.

Why Does The Heart Stop ?

The pumping activity of the heart is done in specific rhythm and the electrical impulses are generated there making the heart to contract and relax. As long as there is electrical activity in the heart, it can function well. Due to some factors, this rhythm gets interrupted causing irregular heartbeat. This in turn leads to sudden cardiac arrest. Many times, this kind of irregular heartbeat is made normal by the heart which is capable of generating nerve impulses. However the heart may stop functioning when there is severe and persistent irregular heartbeat.

Sudden enlargement of heart, congenital heart disease, narrowing of artery of the heart due to plague deposits, and severe disturbances in the transmission of electrical impulses are the leading cause of heart attack.

How Long You Can Survive After The Heart Stops Working ?

Oxygenated blood supply is abruptly stopped when the heart stops working. A person can remain alive for 5-7 minutes after the heart has stopped its beat. Brain cells die fast without oxygen. Immediate restoration of heart’s function can help in the survival of the person. Death will occur within 10 minutes (maximum) after the heart’s function has stopped. In many cases, even if the person is put on artificial lung machine like ventilator, death can occur due to brain tissue damage. Now the person is declared “brain dead”. 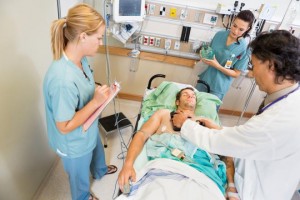 Cardio-pulmonary resuscitation, simply known as CPR is the only method that can increase the chances of survival of the person with heart attack. CPR can be done by any person until the affected person is taken to the nearest medical care unit. CPR can save plenty of life even when the heart has stopped working.

Chest compression, airway and breathing are the fundamental sequence of CPR. The chest area is to be compressed with force using both your hands. CPR should be done continuously after calling the medical help.

How Far CPR Is Effective ?

By compressing the chest with force, you are pumping the blood out of heart artificially. This is the work done by the heart. Indirectly you are helping the heart to revoke its function of pumping oxygenated blood to other organs. The second step in CPR is to give rescue breath. You are blowing oxygen directly into the lungs thus giving artificial respiration. Hence by continued effort of chest compression (30 times) followed by rescue breath you are considerably increasing the chances of survival of affected person.