Henoch Schonlein purpura is an inflammatory disorder involving swelling of blood vessels. It involves inflammation of blood vessels of intestine, skin and kidneys. It begins as a rash and bruises on the skin forming red scaly patches on the legs and buttocks. The capillaries of various joints, intestines and skin become swollen in this disease. It causes pain on the joints and abdominal pain and in many people it cause kidney problem.

This disorder is largely seen in children and adolescents and rarely on adults and old-age people. Normally this disorder does not require any treatment and resolves on its own but medications are to be given if kidneys are affected. HSP is seen affecting the children for 4-6 weeks with rashes which will disappear in due course.

People who are getting vaccinated for cholera, typhoid, measles or yellow fever can get this disorder. Some doctors believe that HSP disorder is largely seen during cold weather.

Viral and bacterial infection can trigger this disorder in children. It can occur after insect bites or exposure to certain chemicals.

Some of the signs of HSP are joint pain, inflammation of joints, rashes, abdominal pain and kidney infection or kidney disease. Initially it starts as fever, joint pain and muscular ache and gradually it affects kidney and other joints causing swelling.

The rashes is seen as a clear symptom in HSP disorder and it appears as small red patches on the buttocks and lower legs and slowly it progresses on knees and elbows.

Arthritis or inflammation of joints is caused due to swelling of joints which is common in many patients with HSP. However this type of joint pain is only temporary and not chronic like regular rheumatoid arthritis.

Abdominal cramps are seen in 50% of the people affected with HSP along with symptoms like vomiting, nausea, diarrhea and bloody discharge in stool. Excess of protein is observed in urine due to kidney infection or impairment of normal functions of kidney.

No laboratory testing procedure is available for confirming Honoch Schonlein Purpura HSP. Hence the doctor has to rely on the symptoms only. He may order for blood profile, urine analysis, skin biopsy (sample of skin tissue is taken for testing) and kidney biopsy test for confirming the disease.

He would request for imaging tests like CT scan or ultrasound scan for checking if the abdominal pain is caused due to other reasons. 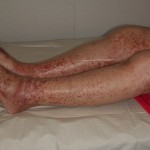 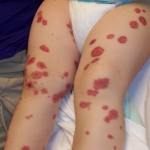 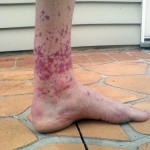 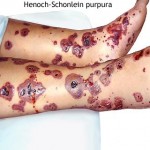 Over the counter pain killers can be used for reducing pain and irritation. NSAID like naproxen and ibuprofen are highly useful in managing joint pain. Rashes will disappear after few weeks and no treatment is required. For some people with severe rash corticosteroids are prescribed. The best part of this disease is it will not produce any lasting ill effect and will resolve in few weeks.

The affected person should take complete rest and drink plenty of fluids. Follow up is necessary with your doctor to prevent kidney complications.

Children affected with HSP disorder has to be hospitalized if they become dehydrated or suffering from gastrointestinal bleeding. Young children cannot tolerate the joint pain and abdominal pain occurring in this disease. They will be put to rest in the hospital and will be put on IV fluids for keeping them well hydrated.