Hernia occurs when some organ or tissue is out of place. When some fatty tissue of the organ pushes through a small opening or a weak spot invading neighboring organ, it is described as hernia. There are many types of hernia based on the organ and tissue it has occurred. Inner groin hernia is known as inguinal hernia, incisional hernia occurs when fatty tissue pushes through the small opening where incision/cut is made during surgery, and femoral hernia occurs on the outer groin, and belly button hernia is described as umbilical hernia and upper stomach hernia is called as hiatal hernia.

Any deviation in the position of organs or group of tissues can create health problem. When part of the stomach tissues deviates from its original place and moves upward toward the diaphragm, it causes hiatal hernia. Diaphragm is a dome shaped organ (set of muscles) that plays a vital role in the process of respiration and breathing. The same diaphragm separates the stomach and abdominal cavity from the thoracic cavity. Hiatus is the term given for small opening of the diaphragm through which the esophagus (food pipe) passes before entering the stomach. Some part of the stomach pushes its way through hiatus opening to enter the diaphragm.

1. Sliding Hiatus Hernia – Most of the cases of hiatal hernia belong to this category. The junction point of esophagus and stomach always move upward and downward between the abdominal cavity and thoracic cavity. This sliding movement of the junction can exert some pressure on the thoracic cavity thus loosening the sphincter muscles of the esophagus. On such cases the opening of the esophagus may not close properly thus allowing some part of the stomach tissue into the diaphragm causing sliding hiatus hernia.

2. Rolling Hernia – Also known as Type 2 hernia, rolling hiatal hernia is a rare phenomenon. Here a part of the stomach protrudes into the thoracic cavity leaving the gastroesophageal junction in the same position. Whenever there is a defect in the junction point or some weakening of muscles, the stomach tissues herniates (moves upwards) through this opening. Thoracic cavity also puts pressure on this protrusion adding more problems. Rolling hiatus hernia occurs only in 4 out of 100 people with hernia.

3. Type 3 – This is mixed type wherein combination of sliding hernia and rolling hiatus hernia can be seen.

Mild hiatus hernia may not show any signs and often it goes unnoticed. If there is large fatty tissue pushing into the diaphragm it can cause symptoms like pain in the abdomen, burping and belching, heartburn, feeling of “fullness”, and pain in the chest region. In rare cases there can be blood spots with stools due to intestinal bleeding. It can cause regurgitation (pushing partially digested food particles into the throat and mouth) after meals along with heartburn. Regurgitation can become severe if large sized hiatus hernia is present and the affected person can experience regurgitation and presence of food particles in his mouth even if he bends down.

Heartburn can occur when food particles are pushed from the stomach into the esophagus and throat along with acid. Enzymes from the stomach can cause moderate heartburn with pain which is often misunderstood for an attack. GERD (Gastro Esophageal Reflux Disease) is another common symptom of hiatus hernia.

However the intensity of symptoms is high if it involves large hiatus hernia. It can cause persistent cough, abdominal pain and chest pain. Some people can face difficulty in swallowing solid foods which is described as dysphagia. 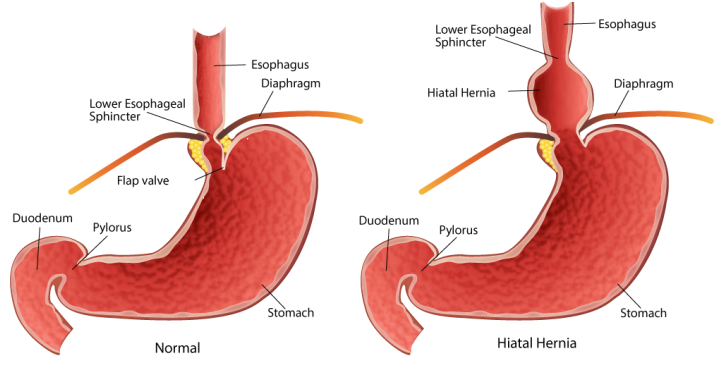 There is no clear cause for the formation of hiatus hernia. If the sphincter muscle or the junction of diaphragm and stomach gets weakened it can lead to the invasion of fatty tissue from the stomach into the diaphragm. But what exactly triggers weakening of the opening is not known. Some people are born with weakened muscle in that area and are prone to develop hiatus hernia.

Persistent coughing can cause considerable strain on the muscles of thoracic cavity. Frequent vomiting and straining of the muscles while passing hard dry stool can cause hiatus hernia. People whose daily job involves lifting of heavy objects are at increased risk of hiatus hernia.

In most of the cases of hiatus hernia no treatment is required since there are no symptoms. For heartburn and acid reflux problem, antacids like Mylanta, Tums and Gelusil and other OTC drugs can be taken. Certain medications like Tagamet HB and Axid AR and other H2 receptor blockers are prescribed by the doctor for large hiatus hernia that causes heartburn and regurgitation. Proton pump inhibitors like Omeprazole and lansoprazole are also recommended for reducing acid production from the stomach.

Surgical intervention for hiatus hernia is considered only if it is large and causing too many complications. If medications and lifestyle modifications does not provide any relief then surgery is done for treating hiatus hernia. The surgeon would pull the fatty tissue from the esophagus pushing it into the stomach. He would also repair the weakened sphincter muscle. Often laparoscopic method is used and the entire surgery is done through tiny incision aided with camera and monitor.