The cell is the basic unit of any living organ and it is the organ that replicate on its own determining growth. The cell does not need any other triggering element for its multiplication since it is self contained. Cell was first discovered by Robert Hooke in the year 1665. A person is made of 10 trillion cells or even more and this fundamental organ can be seen only under a microscope.

Any problem in the cell or its parts can cause serious implications on a person’s growth. Some of the common cellular diseases are cancer, sickle cell disease and Alzheimer’s disease. The cells group together to form a tissue and thousands of such tissue performing same activity, would fuse together to form an organ. 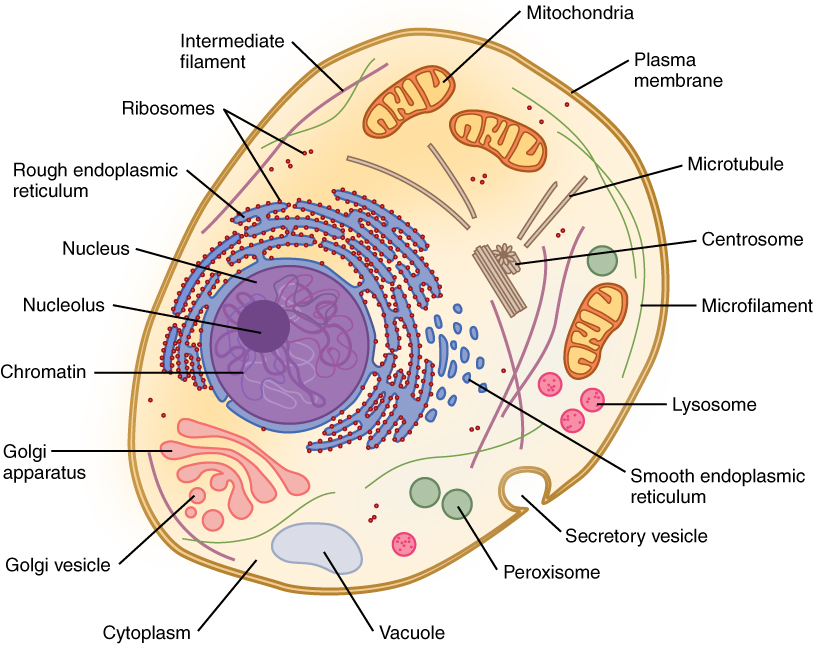 The human cell is made of several organs destined to perform specific function and they are known as organelles. The cell contains a gel like matrix called the cytoplasm which includes all the components of cell. In this article we shall discuss more information about the various organelles present in the cell.

Cytoplasm is the name given to the filling fluid of the cell which is also known as protoplasm. Cytoplasm is the place where number of cell organs like golgi bodies, endoplasmic reticulum and mitochondria is freely floating. In addition to these organs, cytoplasm also contains a nucleus surrounded by a nuclear membrane. Cytoplasm is made of many kinds of molecules and various enzymes, sugars, fatty acids and amino acids that are necessary for the function of cell. Waste products are dissolved in the fluid and are excreted by the vacuoles.

Endoplasmic reticulum or ER is made of network of membranes which includes tubules and vesicles. It acts as manufacturing and packaging unit of the cell and designed well to keep its organs isolated from other parts of the cell, until the process of manufacturing is complete. The membranes of ER vary from cell and cell and it determines the shape and size of ER.

ER is of two kinds namely rough and smooth. Rough endoplasmic reticulum would have the shape of sheets or disks whereas smooth ER is of tube like structure. Ribosomes are found attached to the surface of rough ER. Protein molecules are prepared and stored in the cisternal space of rough ER which gets separated in the form of vesicles once enough protein molecules are synthesized. Smooth ER is a storehouse of lipids and steroids. It contains sarcoplasmic reticulum that stores many kinds of ions in it which can be used by the body whenever necessary. Smooth ER lack ribosomes but contains lots of fats in it. Further SER regulates drug metabolism in the body.

Golgi bodies or Golgi apparatus is a type of packing organ whose main task is to gather simple molecules and group them to make it complex. The assimilated big molecules are packed inside the vesicles for further usage. These vesicles get separated from the organ when it gets enriched with protein molecules. They are also involved in building lysosomes which varies in shape and size depending on the cell.

Lysosomes are used for digestion of nutrients. Golgi apparatus also includes secretory vesicle that empties the enzyme outside the cell. Golgi apparatus stays closer to the ER and when the rough ER has enough of protein molecules it forms a vesicle which then separates and floats towards the Golgi complex where it is absorbed.

Most of the reactions of cell respiration take place in mitochondria. Mitochondria number varies from one cell to another some cells have thousands of it whereas other cells may not even have one. Depending on the requirement of the cell more and more mitochondria are created for supplying energy. Mitochondria have double membrane, outer one covers it giving protection and the inner one folds several times to form multi-layered cristae.

Nucleus is the kingpin of the cell controlling the process of eating, reproduction and movement of the cell. Nucleus is covered by a defined nuclear membrane which contains small pores for exchange of proteins and RNA. Chromatin would get collected in the nucleus while it is in the resting phase. But prior to cell division, the chromatin gets condensed to form the chromosomes. Every aspect of human body including physiology and anatomy is determined by the nucleus.

Microfilaments are thin protein structure found everywhere in the cell. The main task of this organ is to hold the shape of the cell and facilitating movement. Microfilaments together with microtubules (tube like structure) form cytoskeleton which gives the cell the desired shape. The microfilaments are also found in the muscle tissue allowing them to contract.

Microtubules are called moving chromosomes. They play a vital role in cell division. They would pair with chromosomes allowing it to split and attaching to each new daughter cell. In addition to the function of movement, microtubules also engage in moving the cilia and flagella, thin hair like structures that flap during movement.