Ileum is the largest bone of the pelvic girdle and iliac crest is located on the superior corner (margin) of the ileum. It lies on the upper hip region and it is the place where we rest our hands on the hip. At the anterior side the crest takes the shape of pointed bone which is known as ASIS (anterior superior iliac spine). This curved structure is designed to protect the parts of the pelvic region and is closely attached to the muscles, fascia and aponeurosis present nearby.

The large portion of the iliac crest is found at L4 vertebra and iliac tubercle is found at L5 vertebra. Iliac crest is the region present in the superior edge of the ileum and extends till the superolateral corner of pelvic region. Iliac crest is largely used for bone grafting and spinal fusion. Iliac crest contusion is also known as hip pointer. Top curved region of the pelvis undergo injury and bruise can develop on this bone structure. Since many abdominal muscles are fused in the point of iliac crest any injury on this point would cause severe pain. Hip pointer largely occurs in sports persons when the ball hits the hip region with high impact. 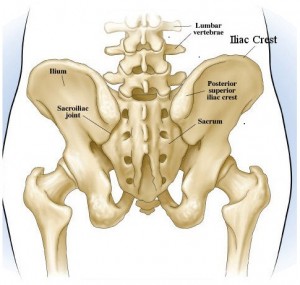 Any forceful blow or direct injury to the iliac crest can cause contusion. Iliac crest contusion occurs due to bleeding of abdominal muscles and swelling. This can cause excruciating pain when the person tries to move his hip region. Bleeding can occur on the periosteum region of the bone resulting in inflammation and the muscles of the iliac crest would develop spasms.

The pain may reduce if the person walks backwards and he should be given rest along with ice compression quickly. If possible the hip region should be covered with foam padding to arrest the movement. Iliac apophysitis is another condition in which the person would develop subtle pain due to chronic irritation. Here the anterior superior iliac spine is largely affected.

Sports persons are at high risk of developing iliac crest contusion. Direct blow is quite common in contact sports like hockey and football. Bike accident is another factor that increases the risk of iliac crest contusion. The bone can get damaged when the person hits the ground with force in the hip region. 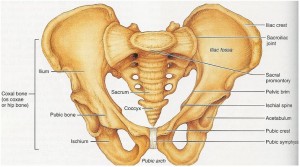 Severe pain in the upper hip region, tenderness, swelling and bone bruises are the common signs of iliac crest contusion. Muscle spasms can occur due to inflammation. Normal movement can become difficult due to such injury. Iliolumbar syndrome is a condition that causes inflammation and wear and tear of ligaments of iliac crest. Pain can be felt on the pelvic region, hip and groin also. Bending the body forward and twisting movements can aggravate the pain further.

It would be easy for the doctor to diagnose iliac crest contusion based on symptoms. He may request for imaging tests of X-rays or computerized topography scan to know the extent of damage clearly. In case of ossification he may order for radiography tests further.

Complete rest is the first line treatment for iliac crest contusion. Ice packs can be compressed on the affected hip region to control swelling of muscles. OTC anti-inflammatory medications can be given to manage pain before reaching the clinic. Muscle spasms can be managed by doing mild stretching exercise. Based on the results of the diagnosis and intensity of damage done to the iliac crest, the doctor will decide further course of treatment.

For severe pain, electrical stimulation is given in mild doses to give relief from the symptoms. He may also give a shot of steroid injection directly on the affected bone. The patient should take complete rest and avoid any kind of activities. Giving sports massage is highly effective in reducing swelling. This would also help in preventing the formation of scar tissue and loosen the muscle fibers inside. If required, your doctor would recommend you to physiotherapist. Doing mild stretching exercises and hip pointer exercises would speed up recovery. Complete recovery can take several weeks or even months. It depends on the extent of internal damage and general health of the patient.