You are here: Home / Information / Impetigo

Impetigo is a contagious skin infection caused by bacteria. Red colored sores occur on the skin mostly around the nose and mouth which would eventually break open discharging yellowish pus. It is seen largely on children and rare on adults. One should be very careful about this skin infection since it spreads easily by sharing towels or any clothing with infected person. Antibiotics are prescribed for controlling the bacteria and to prevent further spreading of infection.

Painful red sores occur on the nose and mouth region. It starts as dark red spots small in size and will eventually grow into blisters. When these blisters break open it discharges yellow colored pus. It is the time when the infection spreads easily to others. The sores will look as if they are coated with brown sugar or honey.

Usually the painful sores occur on the mouth region and nose which may spread to other parts of the body when it is touched by fingers. Large sized blisters (bullous impetigo) can also occur on the diaper area of the infants in some cases. These red sores will grow in number and size and for some children it grows as large as a coin.

Impetigo is caused by strep bacteria or staph bacteria. Either streptococcus or staphylococcus bacteria would enter the skin of the child’s body. There is increased chance of its occurrence if the child already has skin problem or cut or injury in his body. It can also be passed into the skin through insect bites, cuts and burns. Sometimes children may get this infection after they have runny nose or allergic cough.

Children of age group 3-10, children who live in crowded conditions and those who have increased skin contact with other infected children have more risk of getting impetigo. Humid weather condition can also cause impetigo. Any child with broken skin or cut or rash has increased chance for getting this infection. In rare cases it can cause deep ulcers (ecthyma) and serious infection called cellulitis affecting the tissues beneath the skin. The bacteria would enter the lymph nodes and bloodstream causing serious complications.

It is easy to diagnose impetigo infection by mere physical examination of the sores. In case of doubt, your doctor would do a skin biopsy for testing the small portion of the affected skin in the laboratory.

Depending on the nature of bacteria that has caused impetigo, suitable antibiotics are prescribed. For mild case of infection topical creams are to be applied on the affected part of the skin. In case of serious infection, oral pills are prescribed. The child will get relief from pain and inflammation once she is put on antibiotics. The affected area (nose or mouth) should be washed with warm water gently for removing the scabs. The ointment is then applied on the skin twice or thrice as prescribed by your physician.

Once the pus like discharge is controlled, the sores will seize to become contagious. In case of large sized sores, the affected area is covered with bandage or gauze to prevent further spreading. Make sure that the entire course of antibiotics is given to the child continuously. Do not stop the medication after the sores are healed. Still the bacteria would remain latent in the bloodstream and hence finish the course of drugs as prescribed by your doctor. For mild infection without pain you can try using over the counter creams like bacitracin. Always keep the area covered with bandage to help preventing from spreading. 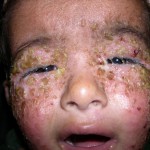 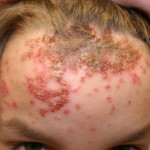 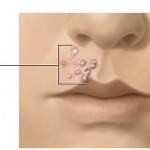 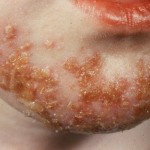 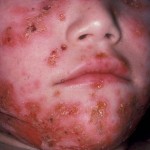 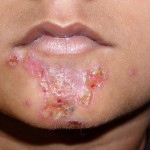 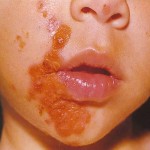 The best way to prevent impetigo is to keep the skin clean and healthy. Avoid cuts or injury on the skin and wash the area thoroughly with soap water. In case you suspect impetigo or other skin infection, do not share the clothes or towels of the affected child with others of your family. It is better to wear hand gloves while you apply ointment for your child. The child may scratch the infected area with his/her fingers and hence trim the nails short to prevent scratching. Insist the child to wash hands frequently. Do not send your child to school until the infection is completely cured.