The color of healthy gums will be pink. Any change in color of the gums to dark red color indicates gum inflammation. The gums may get inflamed and become puffy. There may be bleeding of gums with pain when it gets inflamed. For some people the gums can be receding and become tender. Your gums will start bleeding and is prominent during brushing and flossing. Bad breath and tenderness in gums are also evident in some people.

Improper brushing is the main reason for inflamed gums. When you are not brushing properly it leads to the accumulation of food particles on the cavities of the mouth. This in turn will cause plaque which is visible as sticky film on the teeth confirming the presence of bacteria. To avoid getting plaques you need to brush your teeth twice a day or after every meal.

Bacteria feed on leftover food particles on the teeth causing bad breath and plaque. After few days it becomes hard and forms a thick layer on the lining of gums called tartar. This would cause inflamed gums and bleeding with pain. Normal plaque is easy to remove when compared with tartar. 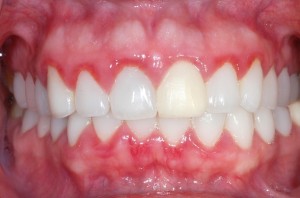 People who do not follow proper brushing techniques, old age people, use of tobacco, having auto immune disorders, those who are prone to viral infections have increased risk of getting inflammation of gums. Use of tobacco in any form can damage the gums giving rise to plaque and tartar. 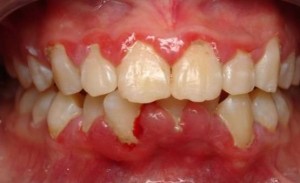