Exact cause for KTS is unknown. However children can inherit this disorder from their parents and hence can be hereditary. According to Bliznak and Staple, intrauterine damage for sympathetic ganglia can cause this problem. When veins are blocked with blood flow, it may lead to vein abnormalities. There may be some fetal developmental defect in mesoderma according to the theory of Baskerville. Some believe that mesodermal dysplasia and ectodermal dysplasia may account for KTS in children.

There are only few cases to support the theory of autosomal dominant pattern for KTS. When tested for monozygotic twins there was symptoms of KTS due to genetic defect. But it was not seen in hetero-zygotic twins.

People who have angiogenic factor AGGF1 have more risk for getting KTS.

Varicose veins (thickening of veins in legs and hands) and port wine stains are observed in some patients. Dark spots are seen on the skin surface and visible blood vessel problems are also present in some cases. There may be occasional bleeding from rectum and bloody discharge in urine.

Examination of abnormal growth of bones will be done by your doctor for confirming this disorder. Excess growth of soft tissues is seen widely on the legs, hands, face and even internal organs. Imaging studies is done for checking the venuos disorder. Arteriography may be performed for properly assessing the KTS symptoms. Similarly some doctors use ultra-sonography, venography and nuclear MRI for diagnosing this disorder. Through MRI, the extent of vascular deformity can be measured.

People with KTS can do well even though their physical appearance will be strange. They are likely to have psychological problems which can be dealt with behavior therapy combined with counseling techniques.

Abnormal development of blood vessels in the abdomen can cause serious problem if not attended immediately.

Treatment for KTS is based on the symptoms and severity of the disorder. For people who suffer from chronic venous insufficiency, using compression clothes is suggested. It would prevent recurrent bleeding from capillaries to some extent. The affected part will also be protected against trauma. Pain management is difficult in particular patients with KTS.

For people who are affected with KTS on limbs, using heel inserts is ideal solution. In severe deformity, orthopedic surgery is performed. 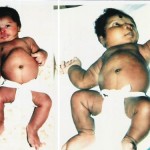 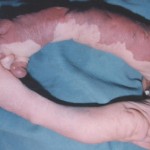 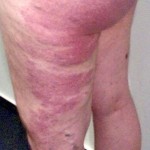 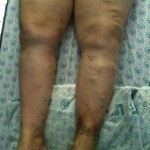 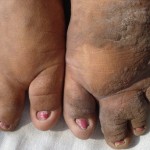 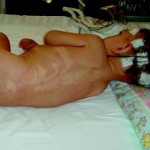 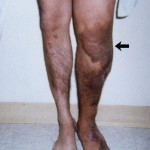 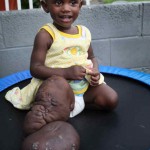 Laser treatment is used for treating hemangioma which would ultimately lighten the port wine stains. Vascular lesions can be managed through effective laser therapy which can also cure ulcers.

Surgery would be the last choice for treating acute pain originating from vascular abnormalities, and some patients prefer to take surgery on the aspect of cosmetic correction. Sclero therapy or venuous stripping is done for correcting the superficial veins, provided the deep system remains stable. It is better to evaluate the potential benefits and risks involved with surgery.

Radiotherapy is done for curing some cases with KTS to reduce the pain and regression of hemangiomas.