Lichen simplex chronicus is a skin disease that causes repeated itching and irritation on the skin. In medical terms this condition is called neuro-dermatitis circumscripta which causes thickening of skin in the affected areas. The person will feel repeated itching and he would start scratching the area without his concern. The skin becomes thick due to continuous rubbing and this condition is called lichenification.

Initially the skin will get infected and cause itching due to dryness. Once the person begins to scratch and rub the affected area repeatedly, the skin layer gets thickened which in turn will lead to more itching. The process thus repeats in a cycle and the disease progresses rapidly.

Atopic dermatitis is the main cause for lichen simplex chronicus. Psoriasis and eczema are some of the other reasons that causes repeated itching. Some people will get intense itching when they get tensed and hence anxiety and stress also forms a reason for this condition. Depression and psychological disorders may also trigger itching sensation in some individuals.

Children who indulge in repeated movements will get continuous itching due to insect bites and scratching of skin. They cannot control their movements of hands and they keep on rubbing the skin which may increase dryness and itching.

Lichen simplex is quite common in people of all ages, including children and elderly people. However the condition is more prevalent in middle aged women than men. Certain conditions like scars, eczema and insect bites may trigger itching. People who have history of venous insufficiency problem in legs are at risk of getting lichen simplex. Similarly it affects the individual who have dry skin at large and those who are prone to stress and anxiety.

Lichen simplex may develop on any part of the body like arms, elbows, and wrists. Sometimes it may develop on the knees, ankles, thighs and feet. Rarely it can occur on vulva and anus region affecting your genitals.

Initial symptoms start with rubbing and scratching of skin which may be due to tight fitting clothes. The person will repeatedly scratch the area which will eventually turn the skin to become thicker than surrounding area (hyper pigmentation). This type of thickened skin will trigger more irritation that will lead to repeated itching and scratching. The affected area of the skin is largely thick and may change in color becoming brownish and leathery. This problem is more particular in dark complexioned people wherein the skin becomes even dark in color. The itching sensation is more intense during night than in the day.

The problem may become chronic and it would increase when the person is under stress. Dark patches or scales develop on the skin resembling plaque. The lesions will have distinct borders and becomes leathery. 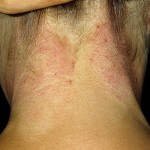 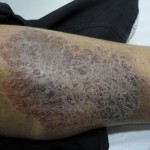 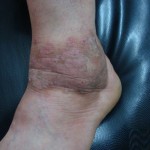 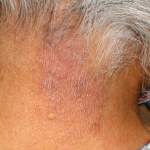 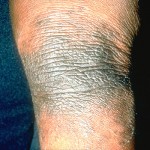 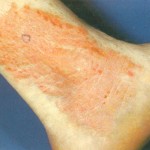 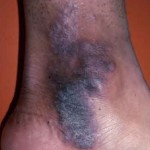 The purpose of treatment is to reduce itching which includes counseling, stress management and modification of behavior to control scratching. You can apply anti-inflammatory lotion or cream that contains steroids on the affected area. Lotions that contain salicylic acid are largely prescribed for treating thickened lesions.

Your doctor may cover the area with proper dressing using medicated moisturizing lotion. In severe cases, steroid injections are given directly on the lesions or thickened skin layers. Sometimes it becomes vital to use mild antidepressant drugs or tranquilizers to get proper sleep during night without itching. Ultraviolet therapy along with topical antibiotics is prescribed for treating intense itching.