The term ‘lipo’ means fat and lipodystrophy refers to abnormal fat changes. It is a medical condition that is marked by degeneration of adipose tissue of the body. It is also known as ‘fat redistribution syndrome’. Building of fat in the body in excess is called lipohypertrophy and loss of fat in the body (more on the arms, legs and buttocks) is called lipoatrophy. Lipodystrophy is dealing with the way in which the body produces and stores fat. In other words, lipodystrophy refers to fat distribution. Due to the increase in the number of patients using antiretroviral therapy ART there is steady increase in lipodystrophy. It occurs in about 35-50% of HIV patients.

Lipodystrophy occurs in two different ways namely building up of fat and loss of fat. Men belong to second category (losing fat) and women tend to build fat. Fat loss is seen on the arms, legs and even on the buttocks of the individual having lipodystrophy. The veins of legs or arms even tend to protrude. Their face becomes sunken with in-growing temples and cheeks.

Building up of fat (lipohypertrophy) is seen largely on the abdomen, breasts and back of shoulders. For some people excess of fat gets accumulated in various parts of the body. Often, this condition coexists with autoimmune disorders like HIV infection causing physical as well as psychological effects. It can cause various metabolic changes in the patient posing risk for his survival.

How Far It Is Prevalent ?

Lipodystrophy syndrome has reduced considerably after increased awareness among HIV infected patients in many countries. In adults it is prevalent in about 10-50% and in children the rate of prevalence is about 33%.

Women have increased risk of developing lipodystrophy when they have HIV infection. In general, there is high risk if the duration of the disease is long and length of treatment is long. This disorder is common among Caucasians. Being overweight, being white and being old give maximum risk for lipodystrophy.

It is believed that antiretroviral therapy is the major cause for lipodystrophy. It is considered to be caused by protease inhibitors and NRTI (nucleoside reverse transcriptase inhibitors). But the exact cause is still not known. HIV infection interferes with the way the body produces and uses fat. People taking long-term treatment for HIV have increased risk of developing lipodystrophy.

No particular test is needed to diagnose lipodystrophy. Your doctor may physically examine the body to assess the fat accumulation or fat loss in your body. Many patients can have high cholesterol level and high blood sugar level if diagnosed with lipodystrophy. Hence the doctor may request for blood fat test for checking triglyceride level, blood sugar and cholesterol. 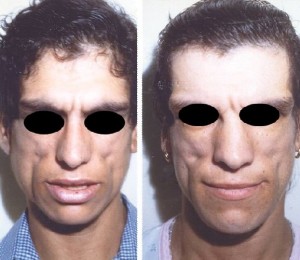 People affected with HIV infection are at high risk of developing lipodystrophy. Hence it is best to follow the instructions of your doctor while changing medications for HIV. The patients with HIV infection can avoid medications like Zerit and Retrovir. It is good to avoid some kinds of antiretroviral therapies. These drugs can be replaced with tenofovir or abacavir which are effective in halting the fat building process. However changing these medications can affect the rate of survival.

This is yet another alternative for lipodystrophy. Fillers are largely used for achieving fullness in buttocks/breasts and even on the face. People affected with lipoatrophy (loss of fat) can use gortex implants which are approved in the USA. Fat substitutes are injected into the concerned part by plastic surgeons. Temporary and permanent fillers are available according to the budget. However be careful in choosing an expert plastic surgeon to perform this surgery. Again you need to get second opinion before opting for plastic surgery.

Drugs like glitazones or rosiglitazones are prescribed for getting the desired body shape. Even diabetic patients can use these drugs which are recommended for correcting the fat functions.

Quit smoking and drinking. Include high protein diet with less fiber if you have HIV infection. Adding omega 3 fatty acids in your daily diet is advantageous. Doing regular exercise will help in improved blood circulation and reducing cholesterol.