Cancer may occur in any part of your body even in the internal organs. Lung cancer is the cancerous growth or tumor on the lungs. The tumors are of two types namely malignant and benign. Benign tumors are not harmful and can easily be removed since it will not spread to other parts. But malignant tumors are potentially dangerous since they attack the neighboring cells and tissues.

Lung cancer is dangerous since it is one of the most difficult forms of cancer. Lungs are vital parts of our body needed for respiration and any tumor like growth inside can lead to problems in liver and brain. Lung cancer has every possibility to spread to brain, adrenal glands and liver causing death. Two types of lung cancer are small celled lung cancer and non-small cell lung cancer. Non small type of cancer develops in almost 85% of lung cancer people. Metastatic lung cancer is the one which starts in any part of the body and subsequently spread to lungs.

Lung cancer will not produce symptoms initially. Some people may get chest pain, persistent cough, and blood with cough. Loss of appetite, loss of weight, wheezing and breathing problems are common later. During advance stages there may be joint pain, facial paralysis, eyelid drooping, bone pain, shoulder and nail problems.

Symptoms related to cancer like dysphagia (difficulty in swallowing), paralysis of esophagus, hemoptysis (blood in cough) and shoulder pain will be there in some people. Symptoms of metastasis like headaches, blurred vision, stroke, weakness and loss of sensation will be observed in some others. Paraneoplastic symptoms are also seen in few people and for some others, there would not be any symptoms at all. Since these signs are indicative of other small disease also, you need to consult your doctor for preventing the risk.

Doctors will ask you to take X-ray and CT scan or bronchoscopy for checking the lung cancer. 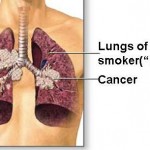 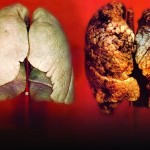 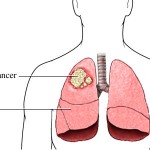 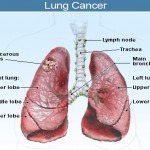 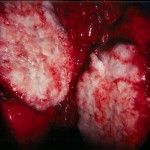 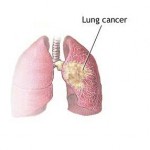 Treatment is available in several forms like surgery, radiotherapy, chemotherapy, photo dynamic therapy and radiofrequency ablation. The doctor will decide the course of treatment based on your age, intensity of cancer and your health condition. Surgery involves removal of cancer causing tumor from the lungs. Depending on the size of tumor and its position, surgeons will open the chest wall and will remove the cancer portion of the lobe and also removal of lymph nodes in the lungs.