What is Maculopapular Rash ?

As the name suggests, maculopapular rash is a kind of skin allergy that causes lesions or papules in the skin. The rash may last for 4 weeks or even more and is caused by virus that causes measles in children. Maculopapular rash largely affects children and sometime adult population. The term “maculopapular” denotes macule (discoloration) and papule (lesions or bumps). This type of rash causes flat blemishes on the skin with reddened lesions or bumps. Rash is limited to certain parts of the body in some people and is distributed liberally in others. It can be acute (short period) and also chronic (long lasting). Treatment for maculopapular rash is purely based on the symptoms. Antiviral medications are prescribed to manage the raised lesions and antihistamines are effective in controlling itching.

Maculopapular rash is marked by the presence of distinct lesions or bumps on the skin. It appears as flat lesion measuring less than one cm in diameter. In some cases the papule can be in the form of raised lesions or nodule forming above the surface of the skin. The lesions may contain pus like fluid inside which leaks out on eruption.

This can cause moderate to severe itching and discomfort on the affected area of the skin. In some patients the symptoms of rash would appear along with signs like fever, headache, confusion of thought and general illness. The area where the rash initially appears depends on the type of virus that has caused it. It can begin behind the ears in case of Rubeola virus and spreads throughout the body. The rash can begin on the face initially and spreads to the truck and extremities subsequently in case of Rubella virus.

Children with weakened immunity are the main target of maculopapular rash. Adults who are immune-compromised due to certain infectious diseases like rheumatoid arthritis and HIV are at risk of developing this rash.

Your doctor can easily identify maculopapular rash by physical examination of the skin. He would look for other symptoms like itching and pain on the affected site. He may order for blood count test or blood culture to confirm his diagnosis. In case of severe infection other tests may also be done to identify how far other organs are infected. The doctor would look for fever and associated symptoms to know whether rash are localized (restricted to specific part of the body) or it is generalized (to many parts of the body). 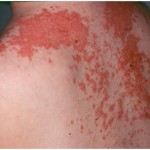 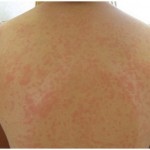 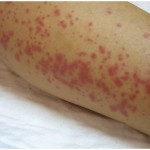 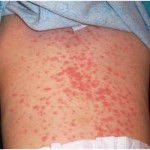 Treatment approach is based on the intensity of symptoms. For mild form of maculopapular rash no treatment is required. It often resolves within a week or so without any medication if the affected person has no other symptoms except lesions on the body. For those with associated symptoms like fever, headache and severe itching suitable medications are given.

Root cause of the disease would be identified before starting the treatment. Antiviral drugs like chloroquine are given in combination with anti-inflammatory medications. For severe cases of infection like Dengue fever IV fluids are started with suitable antiviral drugs to prevent further damage of organs. The affected person should take plenty of fluids to prevent dehydration. Complete rest is recommended until the rash subsides totally. In serious cases like Dengue or Chikungunya the patient would be hospitalized and be under complete care.