In our body, connective tissue plays an important function of strengthening and supporting the body structure. When some disorders develop in this connective tissue, it has serious impact on the cardiovascular system, skeletal system and eyes. This disorder caused by weakening of connective tissue is known as marfan syndrome. The tissue becomes defective when such genes are inherited from the parents.

Marfan syndrome is equal on both men and women and affects all religion and races. Approximately, one in every 5,000 people are born with marfan syndrome.

Marfan syndrome is genetic. The defective gene called fibrillin-1 is responsible for building support and strength to the connective tissue. When it becomes defective, this in turn affects the development of skeletal system.

Several parts of the body are affected by marfan syndrome. The bones may be longer, and the individual will have lengthy legs and arms.

The child of a defective parent has 50% chance to inherit the gene and to develop marfan syndrome. The same gene may mutate itself in different forms in various families and hence the symptoms may differ in different people.

As said earlier, the intensity of the passing over of the defective gene and the mutation of that particular gene determines the symptoms. All people having this syndrome will not have the same symptoms.

The signs vary from mild to severe. The affected person will be taller than normal persons and will have loose joints. The gene affects the long bones like arms and legs. He may have lengthy face and overcrowded teeth.

The eyes of person with marfan syndrome will suffer from dislocation in one or both the eyes. The lens of the eyes may be higher or lower than regular position and may be shifted to one corner. The retina may look enlarged. He is likely to develop cataracts in the eyes.

The cardiovascular system gets affected with weakened valves in aorta which causes aortic dilatation. It would eventually tear the aorta causing life threatening problem. The heart valves may be defective and there may be leakage in the valves. The person may experience fatigue, insufficient breathing and palpitation. It may affect the lungs as well making the tiny sacs swollen.

The defective connective tissue will affect the nervous system wearing out the bone of lower spine of vertebral column. Some of the other symptoms of marfan syndrome are flat feet, hypotonia, arched palate, weakened joints, disability in learning and problems in vision.

Your doctor may look for aneurysm, leakage in heart valves, vision problem, and retinal detachment. Test of Echo and Fibrilin 1 mutation test are done in such people. 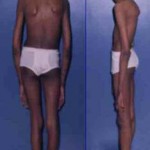 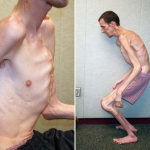 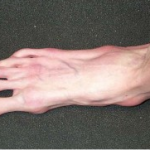 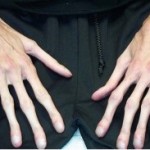 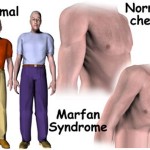 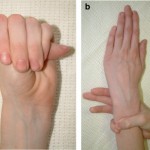 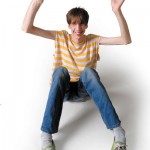 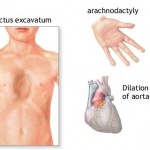 No treatment is available to fully cure marfan syndrome symptoms. However the defects can be corrected.
Heart valve leakage can be corrected by surgery. Vision problems can be set right by wearing contact lenses or eyeglasses. Dental fixtures can be added to make good the palate and teeth.

It is very much necessary to monitor the growth of children, in particular his skeletal muscles and eyes. Orthopedic surgery can be performed to shorten the damage caused to the structure of the body.

The children having such symptoms may be affected psychologically and hence support is needed from their parents and friends.