Measles is an infectious disease caused by virus by name rubella. It would cause runny nose and rashes all through the skin apart from producing other symptoms. Severe case of measles rash can become fatal in young children. You can vaccinate yourself for preventing measles.

The symptoms of measles rash do not appear immediately and it takes 1-2 weeks for showing the symptoms. Some of the signs of measles are fever, sore throat, dry cough, repeated rash marked by scaly blotches and inflammation of eyes. Actually infection develops not all of a sudden but in a series of sequence in 2-3 weeks of infection.

It is the virus that cause measles rash. The virus lives dormant in the mucus of throat and nose and spreads through cough. The infected droplets from the cough fall on the surface or clothes which then spread to other person if he touches the cloth and rubs his nose or eyes.

People who are not vaccinated for measles can easily get measles rash. People who travel frequently and with vitamin A deficiency have increased chance for getting this rash. In severe case, measles rash will lead to pneumonia (virus enters your lungs), encephalitis (it enters your brain) and can also cause throat and ear infection.

Physical examination of the body is done by your doctor for identifying measles rash. Blood test is done for confirming the presence of virus.

Often, measles rash will resolve on its own without requiring any treatment. Treatment can be given only for reducing the symptoms. Over the counter medicines like Tylenol, Ibuprofen can be taken to reduce fever. Children should not be given aspirin since it can cause Reye’s syndrome. In case of pneumonia infection, antibiotics are prescribed.

Include plenty of Vitamin A in your diet since lack of this vitamin can cause measles. Keep the child hydrated and give him plenty of water and fruit juices. Take medicines for reducing fever and get enough rest. 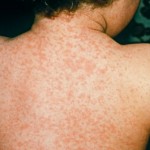 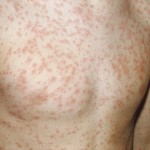 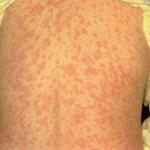 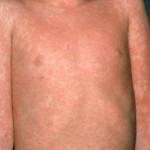 If your child has not given vaccination for measles, you can take the injection once your child got exposed to measles virus. The vaccination has to be given within 72 hours after infection. Pregnant women can take a shot of immune serum globulin (antibodies) for preventing measles virus.