Melas syndrome otherwise known as mitochondrial encephalopathy is a rare disorder affecting the muscles and nervous system. The symptoms of this disorder begin as early as childhood and the signs become evident before the person attains 15 years. It can cause seizures, intense headaches and muscle weakness leading to loss of vision and hearing. For some children it may cause one side paralysis. This syndrome is caused due to defective mutation of mitochondrial DNA. No treatment is available for MELAS syndrome.

The DNA material involved in the making of mitochondria undergoes repeated mutation. Hence MELAS syndrome is a genetic disorder inherited by birth. Mitochondria are particles found in the cytoplasm of the cell. The mitochondria contain a chromosome (different from the regular chromosomes present in the nucleus) which is very small and round in shape. Mitochondrial chromosomes are always inherited from the other since during fertilization MtDNA obtained from the father is lost. Hence this disorder is passed on to the children from the mother.

Defective mutations of the mitochondrial chromosome cause this disorder. Affected mother would pass on the MtDNA to all her children however only the daughters would pass it on to the next generation. In some cases both normal and defective MtDNA are present in the same cell but the number of defective Mt may be large.

Signs of MELAS syndrome become evident between 2-15 years of age. In more than 75% of the cases symptoms of this disorder begin before 20 years. Not all the individuals with MELAS would have the same symptoms and it may differ in affected children of the same family also. This disorder is characterized with stroke like episodes and seizures. This can occur due to deficiency of nitric oxide in the blood vessels of the brain. In many cases loss of hearing, loss of vision can occur. Due to defective muscular growth, the person may be very short in structure.

In addition, the person may show symptoms like vomiting, muscle weakness, fatigue and abdominal pain. This can be due to excess secretion of lactic acid in the blood. In many cases, the affected person may show symptoms of intellectual deficiency and loss of memory. Episodes of defective speech and writing ability are quite common in people with this syndrome. They may have hallucinations and confusions due to febrile illness. In rare cases children can develop diabetes, cardiac problems, GI disorders and kidney problems due to MELAS syndrome. 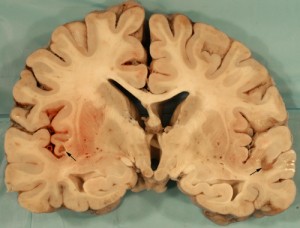 Based on the symptoms of the affected person, the doctor would suspect MELAS syndrome. He may do a brain biopsy to check the presence of ragged red fibers and identify the changes causing a stroke.

MELAS syndrome cannot be treated since it is inherited by birth. In many cases the disorder is progressive and fatal. Treatment can be given only for managing the symptoms of seizures. Anti convulsant medications are prescribed for people having seizures. For repairing deafness, cochlear implants are done.

Moderate aerobic exercises are recommended for patients with mitochondrial myopathy to control the lactate levels in blood. The symptoms of stroke like episodes can be treated with L arginine in the form of oral pills or injection. Recurrence of stroke episodes can be prevented. Genetic counseling can be given for affected mothers to prevent further births in the family.