Meniere’s disease is a type of hearing disorder in which the person experiences ringing sound in the ears and a feeling of fullness in the ears. It was first reported by Prosper Meniere, a French physician and hence the disorder is given his name. In some cases, it may lead to loss of hearing. It develops as an episode resulting in vertigo, nausea and vomiting sensation. The hearing capacity of the person can get affected due to repeated episodes of spinning and ringing in the ears.

It comes as a sudden attack for some people which may last for 2-4 hours. In severe cases it can cause sudden fall resulting in accidents. The affected person may feel that he/she is tilted and falling though he/she may be in straight position. The episodes/attacks of Meniere’s disease can occur either as clusters or there can be considerable gap between two episodes. Meniere’s disease is a rare phenomenon occurring only in 0.2% of the total population. And this problem starts in one ear often and slowly extends to both the ears. Many people having this disease may develop bilateral disease in due course.

Meniere’s disease is characterized with episodes of ringing in ears, spinning feeling and fluctuating hearing loss. In many cases it can cause permanent hearing problem or even loss in patients. The person may feel feeling of fullness in his ears and build up pressure in the ears. Often it starts in one ear and gradually proceeds to the other. The symptoms may start at any age but is more common in the age group of 20 to 50.

There can be recurring attacks vertigo (spinning sensation) which may last for few minutes to hours and in some cases it can lead to nausea and vomiting sensation. Meniere’s disease can cause hearing loss after each episode and for some it can cause permanent loss of hearing. Tinnitus (loud ringing noise in the ear) and buzzing or whistling sound is common symptom of this disease. 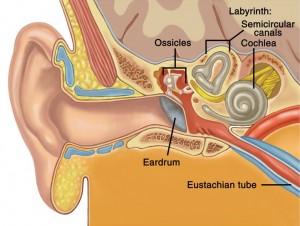 Exact cause of Meniere’s disease is yet to be identified. It may occur due to head injury or severe infections in the ear. For some people excess amount of endolymph fluid in the ear can cause this problem. Some factors like allergies, frequent migraine episodes, genetic predisposition and abnormal immune response can cause Meniere’s disease.

This disease can cause permanent hearing loss and sudden episodes of spinning and falls which may cause accidental injury. Further it can lead to emotional stress, anxiety and depression. Frequent attacks of vertigo and tinnitus can cause death of hair cells of the inner ear over years leading to deafness.

Your doctor will collect complete medical history and conduct physical exam of the ears using lighted instrument. He may conduct audiometry test to detect how sounds are received at different pitches. Some people may have problems in hearing high/low frequencies. Further testing includes VNG (videonystagmography) test, rotary chair testing, video head impulse test and posturography according to the symptoms of the affected person. A person is said to have Meniere’s disease if he/she has at least 2 attacks of vertigo lasting for few minutes and hearing loss (partial or complete) verified by hearing test. He/she should have tinnitus and feeling of pressure in the inner ears.

As such there is no remedy for Meniere’s disease but treatments can be given only for managing the symptoms. Frequency and intensity of symptoms like vertigo and tinnitus can be reduced with medications. Prescription drugs include Lorazepam, Meclizine in suitable dosage and Phenergan to manage vomiting sensation. It is better to consult your doctor if you have symptoms of spinning or tinnitus. It is necessary to take complete rest and sleep for hours after such episodes. Calcium channel blockers like Nimodipine or Verapamil can be given.

It is wise to follow the hydrops diet schedule for patients with this disorder. Fluid pressure in the ears can be controlled with diuretics. Hearing aid is recommended for some patients with partial hearing loss. Miniett device provides remedy and gives improvement in hearing. Gentamicin injection is suggested by some doctors in the middle ear to facilitate balancing function of the ears. Steroids like dexamethasone can help in preventing further episodes of vertigo.

If no other options of treatment give improvement, surgery can be considered. Endolymphatic sac is decompressed to regulate the secretion of ear fluids. A portion of bone is removed from that area and a small tube is placed into the sac so that excess of fluid secretion from the inner ear gets collected here. Labyrinthectomy and vestibular nerve section surgery is also done for restoring hearing.

People with Meniere’s disease should be aware of the attacks and sit down during such episodes. It is dangerous to drive vehicle for them and they should take enough rest after such attacks.